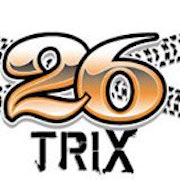 The legendary 26TRIX is hosted each year by the Out of Bounds Festival in Saalfelden Leogang, Austria, and is currently a ‘gold’ event on the Freeride Mountain Bike World Tour. 26TRIX has been pushing the trick level forward since its inaugural edition in 2006, when Greg Watts nailed the first ever double backflip during an international competition.

In recent years, the competition has become one of the highlights of the dirt jump year, staged on a uniquely-constructed course that is known as perhaps the most challenging on the scene. The big-sized dirt line secures the perfect speed for eight XXXL jumps, added in 2009, which guarantee massive airtime, sometimes boosting the riders up to five metres in the air.

Many of the best freeriders in the world have taken part in 26TRIX, including past champions Jamie Goldman from the USA (2007), Trond Hansen from Norway (2008), and American Cam McCaul (2010), as well as other stars such as Andreu Lacondeguy, Martin Söderström, Grant Fielder, Benny Korthaus and Darren Berrecloth.

$25,000 of prize money was on offer to competitors in 2013, when Brit Sam Pilgrim emerged victorious. Canadian Brett Rheeder and Brit Sam Reynolds made up the rest of the top three. Windy and rainy weather conditions caused the finals to be cancelled, so results from qualifying were accepted as the final result. The prize for best trick went to Szymon Godziek for an incredible cash roll.