What did you do during the shocking (well, terrible but probably not that much of a surprise) weather last weekend? While some of us shamefully left our bikes to one side (confession over), Orange’s Toby Pantling was battling with the elements with characteristic optimism at the Race Face Circus of Dirt enduro race down in Newnham Park, Plymouth. Who else was there? Read on and then let us know how your experience differed to Toby’s (as we feel there might be some varying tales out there!) in the comments section.

Your reporter, Tobias Pantling. “Let’s get amongst it!”

I woke to torrential rain and an amber weather warning: it was time to get the 2014 enduro race season underway. While most people where still tucked up in bed, I was putting my favourite saying to the test when it starts raining: skin is waterproof, let’s get amongst it!

I was at the first round of the RaceFace Circus of Dirt, and they’d brought their own format to the table, with no practice on Saturday, and only one practice lap on Sunday followed by one race lap. The loop was really well marked out and held three timed stages over 14 km. Sign-on was between 8 and 10 a.m., then two hours to get on track and get your one practice lap in with no sessioning or pushing back up being allowed. Racing then started at 12 and you could cruise around in your own time with your mates. It worked out really well and made for a social day, but due to the weather most groups of riders seemed to get their heads down and get it done to get back to the warmth of the café.

Stage 1: This was a short, fast stage that was perfect to get the race underway. You followed an undulating hillside traverse, which was pretty much a case of follow the stream, and you were either hanging on or pedalling as hard as you could at all times. At the bottom there were a couple of amazing wide-open foot-out muddy turns to separate the field. At around two minutes it sure got the heart rate up and blew the cobwebs out.

Despite Toby’s enthusiasm, things weren’t as smooth for many riders struggling with the horrendous conditions.

Stage 2: Talking to the organiser before heading out on track he said this was a regular locals’ DH track and it would be a real treat. It felt amazing on the little bikes (I was racing my Orange Gyro 29er, ahem, cough, plug etc.). The track had a pedally start with a lot of high lines to be had around roots and stumps (if you fancied trying to hold them). The bottom section then had a real DH track feel with a few fly-offs and ruts to hook into. You could tell it sees some traffic as it held up really well to the weather and the amount of riders it coped with throughout the day.

Stage 3: The final stage felt like it had been pretty much freshly cut for the race: it was a real test. There was a mix of greasy pedalling and crazy freshly cut cambered sections with some tight trees thrown in for good measure. The final muddy shoot into the finish was great to watch, with only a handful of riders making it down on their bikes!

The race: It was really cool having no set start times, as I was able to ride around with my mates and share some good banter. The first stage was a bit of a shock to the system, as it’d been a while since my last race, but once you got to the bottom I remembered why I race, especially in those sort of biblical conditions. The liaison to Stage 2 was a real joy as everyone was buzzing from the adrenaline from 1, even though part of it was traversing across a waterlogged field. I was most looking forward to this stage, as I felt confident on the pedals and holding the high lines I’d noticed earlier in the day. My race run was quickly shattered after having a very near miss with a deer, sending me straight over the handlebars and face-first into the mud… I jumped back up and got on my bike as quickly as possible, only to realise my bars were twisted pretty bad but I cracked on. Moral of the story: watch out for wildlife! I knew Stage 3 was going to be tough and would have changed a lot since practice. The pedalling was over sooner than I had expected. However, the off camber had taken a beating and I ended up paddling my way through, but I was pleased just to stay on the bike and keep it upright. The final shoot was interesting, but luckily I had a body on track to use as a berm and keep me on track (cheers whoever that was!). 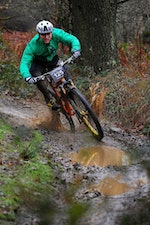 Doing battle with the elements!

All in all, a great day of racing even though unfortunately Stage 3’s times didn’t register. The organisers did such a great job holding such a fun race when up against the elements. I’m really looking forward to the second round on Sunday March 2nd.

It's Stanton central on Dirt! Now we take a look at their 4X frame in the first of a series of hardtail-centric features.

Here's a roundup of 5 recent bike films we like but haven't featured.

Fistful of Films: 5 Edits We Like (Plus Some Other Stuff)
We use cookies on our website to give you the most relevant experience by remembering your preferences and repeat visits. By clicking “Accept All”, you consent to the use of ALL the cookies. However, you may visit "Cookie Settings" to provide a controlled consent.
Cookie SettingsAccept All
Manage consent