It’s been a fine week at Dirt Towers, with sunshine every day we’ve managed to get out on plenty of rides – spring is in the air people! Maybe not, but we’ll remain hopeful. What is in the air is the race season; with less than two months until the DH World Cup and Enduro World Series kick off, things are hotting up for the world’s top racers (partially ‘cos so many are sunning themselves in southern countries, jealous).

Anyway, here’s your dose of Dirt news for the week:

There’s been a lot happening in the world of Dirt, not least the Enduro World Series entries opening to the masses, with reportedly massive interest. Are there any entry spaces left at all? The internet was close to full breakdown we hear! You’ve been living under a rock if you haven’t seen Cedric Gracia’s horrendous injury video from a few months ago. The man nearly died, which isn’t even the first time he’s been close to the edge in recent years (remember his crash in Val di Sole in 2012 that resulted in a broken hip and internal bleeding?), so it’s good to see CG back on the bike again so soon and enjoying the trails of Gran Canaria. In fact that’s an understatement, it’s truly inspirational.

3: Mark Weir is also alive and well, albeit broken 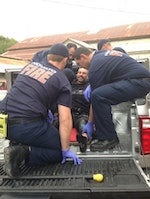 What started out like any other Saturday, complete with shuttles and riding with buddies out at the Ranch, ended with a bam and a crunch like something out of a Roadrunner cartoon when Mark Weir and four friends attempted to clear a downed tree limb that had fallen across one of the trails in a previous storm. As a result, Weir sustained a broken sacrum and fractured his pelvis in three places.

Cannondale/WTB’s Mark Weir sustained another near-life threatening injury, although his was off the bike (read the story on WTB’s site here). While clearing trail debris at home in Novato, a large portion of tree fell and trapped Weir, breaking his sacrum and fracturing his pelvis in the process.

Wanted to say THANKS to all you guys for all the support. The motivation it has brought I could not have done without you.

Wanted to see if I could have some of this posted to say thanks to everyone for the support. If it’s too cheesy sorry, those pain killers make me loopy.

Known as a bit of a tough man, it should come as no surprise that Weir is in good spirits and has written the above in an open letter to his supporters/fans about the injury on WTB’s site, read the full letter here.

Here’s a nice edit to remind us that it’s still winter in Wales, even if the sun has been out. Pretty much how our local trails look – muddy, slippery, a lot of fun.

“They call it ‘taking air'” – watch ITV’s news story for plenty of classics like this.

The recently opened pump track in Rhyl (N.Wales), Marshtracks, looks utterly ridiculous – in a good way. How long is it?! Check out ITV’s video and tell us if you can spot any familiar faces from the DH World Cup scene.

6: Athertons hard at work in the sunshine

While some of the world’s top downhill racers have decided to head south to warmer, more summery hemispheres, the Atherton family and their GT Factory Racing team have stayed slightly closer to home, heading to Fuertaventura in the Canary Islands.

The whole of our team are pretty much at the top of their sport, which can lead to the risk of athletes getting comfortable. When we go to the resort we are taking them out of that comfort zone and getting them to mix with some amazingly talented, strong and fit individuals. It takes their training up a notch and pushes them on.

Team CRC/Nukeproof’s latest signing, Mike Jones, shows us what the new trail at Afan in South Wales is all about. Looks pretty bloody good! Especially if you’ve got Mike’s skills – some style right there.

Title getting you all excited? Well, the wheel size is pretty much irrelevant in this instance as most the other top racers (4 from top 5) were on the same size hoops. Fair play to Trek World Racing’s Brannigan, who beat some of the world’s best, including Sam Blenkinsop, Nick Beer, Brook MacDonald, Cam Cole, and more. It does signify the first major win on the wheel size, and presents the shape of things to come on the World Cup DH circuit in 2014.

Here’s a non-related video of Brannigan that’s well worth watching:

9: Whitestyle goes down in Leogang, gets slopestyle season going

The annual Whitestyle snowy slopestyle took place last weekend in Saalfelden Leogang in Austria, with Antoine Bizet taking the win. Check out US ‘rookie’ Nicholi Rogatkin too – what’s that trick even called?! Spins, flips, and whips-a-plenty.

And here’s some Supercross action to round things off, Rd7 from Arlington.

* Have a great weekend on the trails! *

Won't Back Down is now starting to premiere all across the country, but is it worth a watch? Too bloody right! Here's our full review...

Picking up the DJ mantle this week is none other than Junior World Champ Tahnée Seagrave, so come on in and discover her favourite tunes...

Under £100 for a dropper post?!?! You'd think it'd be a pile of poo, but first impressions of this RSP Plummet are very favourable...

Won't Back Down is now starting to premiere all across the country, but is it worth a watch? Too bloody right! Here's our full review...

Picking up the DJ mantle this week is none other than Junior World Champ Tahnée Seagrave, so come on in and discover her favourite tunes...

Under £100 for a dropper post?!?! You'd think it'd be a pile of poo, but first impressions of this RSP Plummet are very favourable...

We sat down with one of the sport's true characters at the recent Masters of Dirt event to chat bikes, lifestyle and enduro...

World Cup preview, rider profiles and ways to open a beer with your bike...

Fistful of Films - Five MTB Edits We Like (Plus Some Other Stuff)
We use cookies on our website to give you the most relevant experience by remembering your preferences and repeat visits. By clicking “Accept All”, you consent to the use of ALL the cookies. However, you may visit "Cookie Settings" to provide a controlled consent.
Cookie SettingsAccept All
Manage consent