It’s a surprise that Transition actually get any time to make bikes judging from the colourful antics on their homepage. Racing, road-trips and adventure, they have are hereditary two wheel to the core, too busy having a good time riding to be able to make bikes with any shape to them. But they do.

Located in the top left corner of the USA, Transition share the same woods and mountain that Kona pretty much made their own. But these are now Transition lands too, doing things similar but different. Transition fish for crabs and cool their beer in the river whilst Kona have far too many bikes to concentrate on to be doing such earthy things.

“Transition fish for crabs and cool their beer in the river”

That’s obviously not true of Kona; however, Transition are a brand of but twelve bikes in their range and a twelve year history masterminded by ten people running the show.

Its growing fast but they don’t forget to have fun whilst they go about their key task which is making good bikes – solid, fun, reliable bikes, of which the Transition Patrol is one of our favourites.

There’s a few tall lads designing these bikes too so don’t expect any under sizing here, or lack of, so prevalent with other companies. Consider that one of the longest trail/enduro bikes at the moment is a GT Sanction with 1246mm wheelbase and 488mm reach geometry numbers. The Transition Patrol is very close at 1240mm/483mm but with different seat tube angles for each size frame and super low bottom bracket making it calculated in the corners, weight hanging low, ripping, digging the edge of the tyres in to the turf.

With the prices now lowered you are getting a fabulous component package including Sram XX1, Stans Flow, Race Face Six C cranks and Sram Guide Ultimate brakes. Our recent test bike featured Rockshox Pike up front and Monarch Plus on the rear and our only real picky thoughts were that the Monarch to be overly sensitive, almost nervy where a Fox Float seems to offer more control and poise.

Nevertheless its 155mm rear and 160 mm travel up front with roomy geometry adds up to a very controlled bike, with that low standover aiding body movements, for there will be plenty as it’s a very lively ride. For many people the big news is that for 2016 its now going to be available in carbon. Yes its got smoother lines, but they are the same lines, we’re more than happy with the aluminium bike, but whatever material its one of our favourite 150-160 bikes of the year.

YOU DIDN’T KNOW THIS BUT… 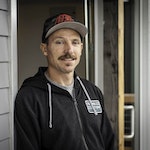 We actually started testing the first Giddy Up frame in a 140mm front/rear travel configuration in a 27.5″ wheel platform. From this we were able to use one bike to determine exactly which travel options, wheelsizes, geo’s, and kinematic changes we wanted. In typical Transition fashion there was definitely a huge debate over the names the bikes were given, and in the end we were finally able to agree on the final choices. Barely. It was more like this….

The Patrol project began it’s life as a 24″ 180mm travel E-Fat bike in the test mule stages. We knew this was the direction that the industry was going to go, so we wanted to be ahead of the curve. We rode it in every possible riding scenario and collected data with our trusty DH5000 Data Acquisition System, which was then analyzed by our Data Acquisition Team back at the Transition Mother Ship. The conclusive evidence proved that it is not possible to ‘schlap da bass’ with this sort of platform. The data we received did tell us that the Giddy Up suspension system we developed was the ultimate suspension layout for boosting, roosting, and schlapping. And when paired with modern and aggressive trail geometry and a sensible wheel size that we would in fact be able to ‘schlap da bass’. We took no haste in using this data to build the production Patrol frames and the moment we swung a leg over these little ponies we knew we made the right choice.

So, what are your thoughts to the Transition Patrol? Let us now what you think.

Stunningly crafted. Effortless ride dynamic. The Trek Session 9.9 is one of the finest DH bikes ever made

One of the lightest 180mm enduro mountainbikes ever made, the Cube Fritzz 180 HPA SL

Whyte G Works 160
We use cookies on our website to give you the most relevant experience by remembering your preferences and repeat visits. By clicking “Accept All”, you consent to the use of ALL the cookies. However, you may visit "Cookie Settings" to provide a controlled consent.
Cookie SettingsAccept All
Manage consent