Ever dreamed of sacking it all off, fitting out a van and hitting the road in Europe?

Our two Euro pikeys Joe Young and Maurice Raine did exactly that and are currently causing mayhem on the continent. Sleeping in lay-bys, living off baked beans and packing in as much riding as possible, they’re living the van life dream. The first leg of their journey took them from the North East down to Lourdes via Fontainbleu and they’re currently set up camp in Ainsa – here’s the first part of their epic roadtrip

Waking up to the sound of rain hammering down on the rooftop of the vanibago and recovering from another night drinking 60 cent litre bottles of beer we thought it would be a great chance to reflect on the first slab of our trip here in Europe. After all, don’t hangovers make even the best of us pensive?

After purchasing a van to convert for racing, one thing led to another and me and one of my mates Maurcie decided to hop on the band waggon and try the ‘van life’!

I roughly threw some bits of wood at the inside of the van until it resembled something homelike, adding electrics, heating and a ghetto outdoor shower for the finishing touches, before we crammed bikes and kit inside to set off for the continent.

Deciding to opt out of the péage grind we finally arrived at the first stop off, Fontainebleau, just south east of Paris. Renowned for its bouldering… not so much for its hills. A week or so exploring the vast amount of boulder problems littered across the surrounding forests saw our fingers shredded to bits.

We were still getting to grips with the language barrier but we soon found the typical British way of communicating in foreign lands most efficient – standing at a fishmongers waving a bucket around pointing at ice for our cool box eventually worked out. Second lesson learnt on the trip was remember to take shower bags off the van roof before setting off as it causes some minor road mayhem, but the less said about that the better!

Straight away the lack of altitude for the bikes in Fontainbleu was made up by the huge amount of sweet booters and lines on offered by all the outcrops of rocks and the sandy, loamy ground. No big rides but plenty of jib sessions between bouldering was just the ticket.

The long haul south to Bordeaux was supposed to be next but, noticing a ‘bike park’ labelled just east on one of my biking apps, we scrapped plans and headed there. Arriving at a parking spot for the night, we were greeted by a vast array of flatness, not a bike park in sight. Bollocks.

We set off back to Bordeaux, but quickly changed plans once again as we passed the city of Gueret sitting in the shadows of a bloody big hill. We donned our lycra in the sweltering heat to smash in some roady miles to see what was about. Weaving through the forest roads we managed to catch glimpses of trails and eyed up a few things for the following days riding.

Freezing snow greeted us the next morning but still we kitted up and had a few runs on the trails – the road jumps and root sections that littered the trails were interesting to say the least! Daylight was minimal in the woods so we could only squeeze in a bit of riding but still plenty of laughs were had sending sketchy lines over sniper roots and ending up facing backwards up the hill.

We were running out of ice in the cool box, so I found myself packing sealy bags full of snow in a vain attempt to keep it cold. The final few days were spent chilling at the local bmx track back in the sun before setting off just in time to watch the first round of the World Cup in Lourdes.

Fuelled by fish finger butties and cheap red wine we wandered the pits and hillside of meeting up with some rowdy French locals trackside. After significantly more drink we explored the local areas of holiness to cleanse our souls before rolling on into the Pyrenees.

Arriving over the border we find ourselves in the historic town of Ainsa. Home to one of the 2015 EWS rounds, and for us, the next few weeks. Plenty of riding and adventures planned so we will keep you all updated with the shennanigans as they happen. 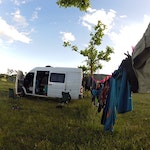 Keep up to date with our trip on our Instagram feeds

Who says clips are fastest?

Atwill and the Dirt/Propain/Zelvy team - Leogang

How the valley kid became a downhill racer

Yet another banger from Semenuk

Brandon Semenuk - Simplicity
We use cookies on our website to give you the most relevant experience by remembering your preferences and repeat visits. By clicking “Accept All”, you consent to the use of ALL the cookies. However, you may visit "Cookie Settings" to provide a controlled consent.
Cookie SettingsAccept All
Manage consent