The lads at Sick! Bicycles have had many names thrown at them, but you could never call them lazy. We featured their supposed first full suss a few months ago but they’ve now shelved that and instead have brought to the table another totally off-the-wall new bike.

This is the Have Blue, it’s been teased on their social media for months and it finally breaks cover as a metal and plastic mutant aimed at racers. So what’s the idea here? The titanium front end is there to absorb the chatter and the carbon rear end for the stiffness (although Sick! claim it’s not at the expense of tracking ability). 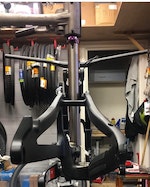 It’s already caused a fair bit of trouble on the internet (head over to Singletrack’s Facebook if you want to see some top quality keyboard warring). We’ll let Jordan and Tim take over from here but we’ve got an exclusive first ride on this coming in September so keep your eyes peeled for more. 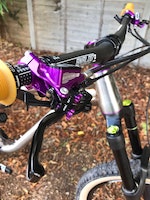 After 8 months development, we have a proof of concept version of HAVE BLUE.

We’d like to introduce you to our cutting edge full suspension platform.

Why the mix of materials?

Our company is known for our long wheelbase bikes, designed for racing.

The titanium naturally kills off any bad trail vibes, hydroforming means that it is stiff where you need it and resilient where it counts.

The rear triangle is supernaturally stiff vertically, whilst still allowing for horizontal tracking, and dual link kinematics means that you get a progressive system with great mid stroke support – great for kickers, jumps and general manhandling. The best of most worlds.

We are now going through the final testing stages, then will be mechanically destructively-testing the frame to find the failure point, far beyond required certification.

Mick dominates with 2 days to go

Bos updates downhill offerings with new Obsys fork, Syors shock and updated Dhyos fork
We use cookies on our website to give you the most relevant experience by remembering your preferences and repeat visits. By clicking “Accept All”, you consent to the use of ALL the cookies. However, you may visit "Cookie Settings" to provide a controlled consent.
Cookie SettingsAccept All
Manage consent