Needles celebrates after placing 3rd at Hafjell in 2013.

We see World Cup racers for 3-5 minutes less than a dozen times a year going at full tilt, race pace. That leaves not just hours and minutes but days and months in between those concentrations of effort.

The first in a new series from DirtTV takes a look at what happens Beyond the Bike and what drives racer’s to compete every year and push their limits to climb the podium steps.

To kick things off in a timely fashion we take a look at South African Andrew Neethling to find out what drives Needles/Rad Man forward each season. Stick the kettle on/open a beer and get into the mind of a rider that has been at the top level for longer than you would expect.

Racing in his blood and always smiling, this is Andrew Neethling’s Beyond the Bike

Andrew Neethling. Let’s get this out of the way first. His name is supposed to be pronounced something like NeaR-Tling. But for the sake of the majority of us, he just rolls with the phonetics that come with NeeTHling. Hailing from Somerset West in South Africa, Needles is 29 years young with a whole lot left in the tank.

Needles is kind of like the brother you always wanted, but weren’t lucky enough to have. His nickname from his friends back home is RadMan. He’s got that big-brother-like mentality of always appearing confident and calm, even if he may not feel that way inside. He isn’t afraid to tease you and pull some pretty ridiculous pranks. He’s probably better looking than you. (Aren’t most big brothers?) He Also, he can undoubtedly kick your ass on the golf course and could probably give you some advice on how to pick up the ladies, too. (Hint: being a World Cup racer doesn’t hurt). Needles also has that worldly experience that big brothers seem to possess. He’s been racing professionally and internationally for 11 years- definitely a veteran in today’s times.

When asked about who would play him in a movie about his life, he answers pretty quickly, “Bradley Cooper. He’s wild, and has a good time, but he’s also got his shit together.” If he could trade places with any person for a week? “Tiger Woods. He was winning a lot of things,” he says, with a grin on his face. Don’t mistake this for a lack of focus. When the time comes to talk about his career and drive, Needles is hard on himself, if not a bit self-deprecating. He describes himself as hardworking, stubborn, and single-minded. He thinks his friends would say he’s a pain in the ass, mostly because he has to sacrifice so much to ride at such an elite level that sometimes it can be tough on relationships. 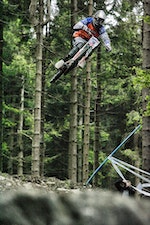 Needles back in his days on Mongoose flying high

When asked about mountain biking back during NORBA’s heyday it hardly sounds like the same sport. Back then, fun was tied for top priority along with performing well. Now, the focus has shifted so much to winning and results that people have to work a little bit harder to find the fun. Luckily, Needles doesn’t have to search too hard to think of some pretty great stories. In the early part of his career he was the lone South African of a traveling circus of Australians that drove from NORBA to NORBA, often times stopping at whatever dirt jumps, skate parks, and good riding spots they could find along the way. With company like Rennie, Bryn, Sam, and Graves, it’s easy to imagine there were probably some pretty fantastic sessions occurring. That crew was his family when he had to spend months away from home. They were like… brothers. Ask Jared Graves about the time he found a condom expanded to the max, full of water in his bed and tried to move it. I guess you could say Needles made Graves wet his bed – an accomplishment that most brothers would probably laugh about.

Pinned in the rain, Needles was just behind Danny in Hafjell, 2013.

Fast-forward to the present, and a few things on the circuit have changed, but Needles has the unique characteristic to stay grounded no matter what the circumstances. Currently on the Giant roster, Needles is the yin to Danny Hart’s yang – a perfect compliment to the raw talent that Danny brings to the team. A relationship that’s taken a few years to gel, Danny and Needles are more like siblings than rivals, while still having a healthy competitiveness. Like all brotherhoods, the benefits of such a relationship is the camaraderie, and also the ability and willingness to learn. From Danny, Needles has gained practical knowledge of things like line choices. Even greater is the ability to watch a guy like Danny who is so incredibly calculated that he’s able to turn off his mind and push away mental distractions.

Not just team mates, Danny and Needles golfing in the pre-season.

Being around Needles is easy. He’s always upbeat, always laughing, and always has a entertaining stories. Something you might not guess about Needles? He gets lost in his head a bit, which can be a blessing and a curse. If he does well at a race, he sometimes talks himself out of feeling like he deserves that result. This can be good for stoking the fire of competitiveness, but he admits that it’s definitely a head game that he struggles with. Racing world cups is most definitely not for the faint of heart or people who can’t handle pressure. Imagine racing at the top level for 12 years never getting on that top step. Most of us would have probably thrown in the towel, but that’s what separates guys like Needles from people like you and me. Needles wants to win, that much is obvious. If for no other reason than just to experience the relief of pressure and also because he knows he has it in him. Everyone does; and that’s where the pressure gets really heavy. Finishing 3rd in Norway last season puts him at the top of the list of guys who are “thisclose”, but haven’t broken that barrier…yet. Though it visibly bothers him that he hasn’t won, he’s so in control of his emotions that even if it never happens, it won’t be a case of, “why not” or, “what if.” It’ll be the way things were supposed to be.

Racing is still number one, coming in hot at Mont Sainte Anne.

For now, racing downhill is the one and only focus. Retirement is not in the forefront of his mind. When he does eventually ride that trail, there are many ideas as to what the future holds. There are bike parks to be built in South Africa. There are enduros that may or may not be raced. There might even be a Rampage attempt – he’s a Crankworx slopestlye veteran, so it’s not totally out of the question. There is the inevitable job in the bike industry. He does, after all, have a degree from the University of World Cups in Downhill Racing, something that most bike companies covet. But the one dream he’d love to see realized takes it back to the family: forming a racing team with his younger brother, Jonty. “That would be the ultimate dream come true,” he says.

Until then, every racer should be put on notice for the coming season: RadMan is looking to strike this year.

beyond the bike needles

Cairns World Cup Downhill Finals | Dirt Photo Gallery
We use cookies on our website to give you the most relevant experience by remembering your preferences and repeat visits. By clicking “Accept All”, you consent to the use of ALL the cookies. However, you may visit "Cookie Settings" to provide a controlled consent.
Cookie SettingsAccept All
Manage consent