After we asked you all to warm your spanners up and give us some insight into your best and worst trail side bodges the mailbox has been flooded with some brilliant ideas. Highlights of part one were definitely the cartoon explanation of a home made chain device and in episode two we were treated to such delights as the toy car clutch mech and the shoe saddle.

In part three we serve up another hearty portion from the vat of bodge soup, as you will see the ingenuity is seemingly endless.

First up is what might be described as a bit of a cave man style bodge but none the less it did the job. Mat Fraser got in touch with us and after his shock blew a gasket out riding, he took drastic action and replaced said shock with a bit of wood!

A failed shock sorted by breaking up a pallet and drilling some holes with my multitool. Ugly but it got me home.

This reminded us of Straitline’s April fool back in 2011, the Quickie Stiffy was an amazingly simple piece of engineering designed to turn your DH bike into a hardtail, superb idea…

When an email starts with, ‘My mate Dave” you know its going to be gold and this bodge did not disappoint. The Resonant Frequency Attenuator or REFA for short is the solution to a problem of brake vibration experienced by said Dave on his bike. After what must have been a nightmare of brake wobble and squealing Dave came up with a solution Ray Mears would have shed a tear for. A bit of wood and an old inner tube, we present, the REFA.

The REFA in action on Dave’s bike.

My mate Dave was having trouble with the noise/vibrations coming from his rear Avid brake. Being an engineer he designed this Resonant Frequency Attenuator which is still working a treat after the better part of a year!

Lastly in this bunch of bodges is a real long lasting one, maybe not the nicest looking bodge but are any of them? Changing brake pads pre ride in a carpark holds all sorts of risks for small components, unfortunately Ant Ling suffered such an issue. Thanks to Ant’s mate Adam for sending this one in.

My mate (Ant Ling) lost a pad pin while we were enjoying the south downs way..but you can fix anything with a Leatherman.

He rode it like that for months… Despite finding the pin in the car park where he changed his pads that morning!! 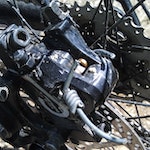 Anything can be fixed with a Leatherman, anything.

Dirt 100 2014: Can't Live Without - Our pick of the best 'alternative' products
We use cookies on our website to give you the most relevant experience by remembering your preferences and repeat visits. By clicking “Accept All”, you consent to the use of ALL the cookies. However, you may visit "Cookie Settings" to provide a controlled consent.
Cookie SettingsAccept All
Manage consent