Canadian Sterling Lorence is a professional commercial photographer based in Vancouver, British Columbia. He grew up mountain biking in the moody forests of the North Shore, and it was this atmosphere of unusual light that inspired him to become a photographer.

Over the last fifteen years, he has earned a reputation as a photographer with unique and original perspectives, as he has travelled the world shooting the evolution of freeride mountain biking alongside some of the sport’s greatest athletes and most progressive brands. However, some of his most famous images have been those that have shown off the famous trails of his own back yard – North Shore, Kamloops and Whistler.

He says he is inspired by ‘incredible places with breathtaking scenery and striking light’, and these motivations are clear from his entries to the Red Bull Illume competition, the world’s premier international photography competition dedicated to action and adventure sports. He was a finalist at the 2010 competition in the ‘Illumination’ category and in 2013 in the ‘Energy’ category.

In December 2013, it was announced that Sterling had won the third Pinkbike Photo of the Year contest for an image of his old friend Thomas Vanderham shredding a berm in Kamloops. The photo, like much of Sterling’s work, used artistic lighting to amplify the riding, and was another to add to his portfolio of some of the most iconic photos in mountain bike history. MY FAVOURITE PHOTO PHOTOGRAPHER STERLING LORENCE REAPER LOG RIDE, ERIC VAN DRIMMELEN, 1998 Widely regarded as one of the top mountain bike photographers on the planet, Sterling Lorence is the go–to man for...
7 years ago | by Dirt HQ 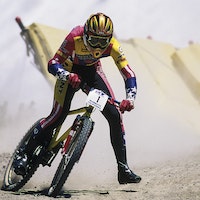 Who do you think is the most talented mountain bike rider ever?...

As photographers the three people on this page have all worked with some of the greatest bike riders on the planet, but who do they think is the most talented...