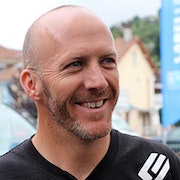 At the age of 19, Rob Roskopp travelled from Ohio to California with just $800 in his pocket with the intention of going to university, but within a year was sponsored by Independent Trucks as a pro skater. He went on to feature in Scott Dietrich’s legendary Wheels of Fire film alongside Natas Kaupas, Steve Alba and Christian Hosoi, and also had one of the 80’s most legendary signature decks, the Jim Phillips-designed Santa Cruz Rob Roskopp.

However, he quit skating in 1990 in order to study business at San Jose State University and work part-time at Santa Cruz Skateboards. Three years later, he co-founded Santa Cruz Bicycles with Rick Novak, in a space the size of a single car garage in the Seabright Cannery, in Santa Cruz, California.

The brand launched on to the market the following year with a single pivot dual suspension bike called the ‘Tazmon’. The ‘Heckler’ arrived in 1995, and is still part of the Santa Cruz range today, along with 19 other models of mountain bike and a full women’s ‘Juliana’ range. All bikes are made from either carbon fibre or aluminium, and range from hardtails to 10″ travel downhill machines.

Rob remains CEO of the company he founded and has become one of the most influential figures in the sport. The Santa Cruz brand has a strong identity and incredibly loyal fanbase, and is well-known for its sponsorship of the Syndicate team featuring some of mountain biking’s biggest stars such as Steve Peat, Josh Bryceland and Greg Minnaar.