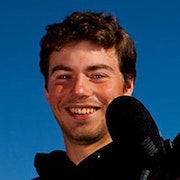 Rob Parkin is a professional film producer, who says he likes ‘strolls on the beach, mountain bikes and advances in digital cinema’. When not behind the camera, he is also a talented rider in his own right, taking part in cyclocross and enduro races, and regularly battling it out with his brother John at the Megavalanche and other uber mountain races.

Rob and John are most well-known for being the creative forces behind the renowned Dirt TV race videos, featuring quality images, videos and commentary from downhill events on the World Cup tour. Their output over recent years, captured using the most up-to-date filming equipment around, has secured them a loyal following.

And if all that wasn’t enough, they also now produce a series of films from each event in the Enduro World Series. Beginning with the inaugural competition in 2013, their output has included two videos showcasing each event in the series in the lead-up and during the race, plus a feature-length highlights show broadcast online by DirtTV in the week following each race.

More than just race highlights, DirtTV’s EWS coverage puts storytelling front and centre to ensure meaningful and entertaining coverage of the new discipline, featuring both race leaders and the rank and file. The format of enduro doesn’t necessarily lend itself to live TV or spectating, but the Parkin brothers successfully present it to the world, using their bike-riding skills to get around the far-flung enduro courses.