The opening round of the Schwalbe Euro 4X Series has just taken place in Winterberg, Germany. The race had nearly 200 riders entered so practice has been busy and the track has had a constant flow of riders for the whole weekend.

In qualifying, Michael Mechura had a perfect run to take the fastest time ahead of Jakub Riha, Joost Wichman and Tomas Slavik. Just 2 seconds covered the top 25 riders making this one of the closest qualifying sessions ever in 4X.

In the women’s Steffi Marth took the fastest qualifier ahead of Katy Curd and Laura Brethauer.

So onto race day. There was some light rain during the finals but that actually made he track even better. The corners opened up and had more grip so the riders were really happy.

The drama all started to unfold in the quarter finals. In the first quarter, Adam Stasek and Milan Mysik came together in the first turn and were out of the race. In another quarter final  Joost Wichman found himself in trouble in 4th place half way down the track. He took a risky inside line and crashed out of the race. He was badly bruised, but will be back.

In the semi finals Tomas Slavik and Michael Mechura made perfect starts and booked their place in the final. Scott Beaumont and Daniel Prijkel were also flying all day and moved into the finals.

So first up were the women. Fastest qualifier Steffi Marth was up against Katy Curd, Laura Brethauer and Tanja Hendrysiak. Curd got the snap and led into turn 1. It was still anyone’s race down the second straight, but Curd held them off. Heading to the lower parts of the track, Steffi Marth pushed Katy really hard, but Curd held onto to take the win at round 1 of the Schwalbe Euro 4X Series.

The men’s final stepped up to the start. Mechura on gate 1, Slavik on 2, Beaumont on 3 and Prijkel on 4. As the gate dropped, Slavik led into turn 1 with Boom Boom behind him and Mechura in 3rd. Beaumont got wide on the exit and Slavik pulled a small gap. Heading onto the lower section the top 3 riders bunched up, and in what was the pass of the day, Mechura squeezed up the inside of Beaumont with no contact to take 2nd position.

It really was text book 4X riding and a great example of how precise and skilful 4X racing is now. Across the line, Slavik took the win from Mechura, Beaumont and Prijkel.

An awesome race and a great start to the 2012 Schwalbe Euro 4X Series.

Round 2 of the Schwalbe Euro 4X Series is in Leibstadt, Switzerland on August 5th.

Keep up to date with the Schwalbe Euro 4X Series on: www.euro4xseries.com 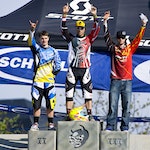 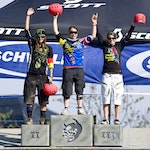 PORC mud bath: Beaumont and Gough take Schwalbe British 4X Series Rd2
We use cookies on our website to give you the most relevant experience by remembering your preferences and repeat visits. By clicking “Accept All”, you consent to the use of ALL the cookies. However, you may visit "Cookie Settings" to provide a controlled consent.
Cookie SettingsAccept All
Manage consent