After suffering a serious spinal injury in September Martyn Ashton has been progressing like only a guy with his positivity can. Visits from friends have kept Martyn upbeat and although I’m sure he has had down days projects like Road Bike Party 2 have definitely kept him occupied.

Even after such a challenging injury Rob Warner summed things up pretty well.

I don’t think you’ll meet many people as strong as Martyn is, he’s just unbelievable. 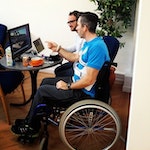 Martyn and Rob Kitchin working on the edit for Road Bike Party 2.

Filming was nearly complete for the sequel to Road Bike Party when Martyn was injured so he enlisted the help of some friends to get the edit finished. It might not be mountain biking but hell who cares, there are some serious skills being laid down in this edit from three of the best riders you will ever witness ride a bike.

Today we take a look at our favourite videos from the last 12 months...

Today we take a look at our favourite videos from the last 12 months...

What better way to kick of 2014 than a look back over the last years top crashes...

Specialized's Enduro is one hell of a bike...

Dirt 100 2014 - Specialized Enduro Expert Carbon
We use cookies on our website to give you the most relevant experience by remembering your preferences and repeat visits. By clicking “Accept All”, you consent to the use of ALL the cookies. However, you may visit "Cookie Settings" to provide a controlled consent.
Cookie SettingsAccept All
Manage consent