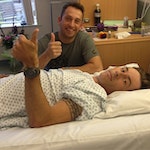 Thumbs up from two legends, Ashton and Hawyes.

It’s never easy to write about a serious injury but this one is especially tough as Martyn Ashton is a rider that has been inspiring riders for what seems like forever.

During a demo at the Moto GP on the 1st of September Martyn fell backwards from a 3m high bar landing with “significant force” on his back. After being stabilised he was airlifted to Coventry Hospital where it was discovered he suffered severe damage to his spinal cord and dislocated his T9 and T10 vertabrae.

The initial prognosis isn’t good as Martyn has currently lost feeling below the point of injury. Having been transferred to RJ & AH Hospital, Oswestry’s Specialist Spinal Care Unit he is receiving the best possible care.

Ashton’s long standing riding partner from Tricks and Stunts and Chainspotting Martin Hawyes has been with Martyn through this tough start to a long road of recovery. Martyn thanked everyone for the support he has received so far:

Since the accident I’ve received so many wonderful messages and well wishes, I can’t thank everyone enough for those – it has been hugely supportive. I’m also incredibly lucky to have amazing family and friends, who are all rallying around myself, Lisa and Alfie and helping us through this tough time. As a result I’m feeling very positive and ready to face the tough challenge ahead. I’m just taking it day by day, hoping that I can make enough progress over the next three months to be home for Christmas.

Martyn was almost finished shooting the sequel to his hugely successful Road Bike Party video, we’ve heard on the grapevine that he is already working in ways to finish the edit so watch this space.

Everyone here at Dirt wishes Martyn the best recovery possible and we’re looking forward to what he has up his sleeve for Road Bike Party 2. For now lets have a look at the first and most creative road bike video we have ever seen.