Big up to course builder Guido Tschugg for giving us one hell of an exciting 4x finals, the weather played it’s part too with rain pissing down all night leaving several corners including the last grassy turn sketchy as you like. The racing seemed to have it all, first corner carnage, second corner carnage, passing down the big main straight, wipes outs on the last corner…you had action in bucket loads all the way to the finish in Leogang tonight.

Fastest qualifier Michal Prokop was amongst the many who crashed out, Prokop doing so in spectactular style on the main straight doubles, others included Mitch Ropelato (first corner, 1/16 finals) and Martin Soderstrom (second corner, 1/16 finals), Dan Atherton who was looking fast and smooth and Roger Rinderknecht.

Healing vibes to David Graf who was airlifted to hospital after a first corner incident.

Jared Graves was unstoppable all night, even with the short, steep start straight he and was a bike length clear in nearly every round after just a couple of pedal strokes. The final looked like it might be a replay of Maribor with Graves up against three RSP riders-Wichman, Slavik and Marosi. Graves got the snap out of the gate but Wichman dived tight inside on the first corner, almost kamikaze like, and pushed Gravey wide, nearly taking him out. But the Yeti Fox Shox Factory Race Team rider simply turned on the Aussie power and blasted out of turn one in front of the chasing RSP pack. Jared kept his cool and held the lead to the line to take a well deserved win.

In the womens event it always looked like a battle between fastest qualifier Romana Labounkova and Anneke Beerten after Anita Molcik binned it in semi final two. The Suspension Centre rider Beerten lead from the gate in the final and now leads the overall from the absent Jana Horakova.

Tom Dowie did the Chicksands massive proud with a 12th spot. 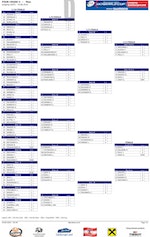 Saturday at the Megavalanche saw the start of the Mega Ladies competition at the top of the Glacier at Alpe d’Huez. After a holeshot from...

The Chatel MountainStyle event went off last weekend and by the look of this video it was more Mountain than Slope…rough as. Here’s the results and...

Chatel Mountainstyle:Brandon Semenuk Winning Run
We use cookies on our website to give you the most relevant experience by remembering your preferences and repeat visits. By clicking “Accept All”, you consent to the use of ALL the cookies. However, you may visit "Cookie Settings" to provide a controlled consent.
Cookie SettingsAccept All
Manage consent