Video and report from the finals at Inners. Okay, so this is a bit late but Ronan Taylor has done a great job documenting the Scottish race season for DirtTV this year. Hopefully he’ll be back again stepping it up for next year too.

Innerleithen saw the fifth and final round of the Scottish Downhill Series take place at its famous venue at the weekend. With it being the last race of the series, many riders were there to try and boost or secure their overall rankings. This meant some riders were flat out with nothing to lose and others were trying to keep their overall positions. The cancellation of the fourth round meant that all four rounds counted towards points, rather than four out of five (which had been the planned system at the start of the year). This messed up some rider’s chances of a good position at the end of the year but benefited those who had not missed any of the races.
It was a pleasant surprise to see Emma Guy and Crawford Carrick-Anderson at the race; they both showed they still have the speed by winning their categories. It’s cool to see that legends like themselves, are still into racing even after retiring.
A big get well soon has got to be said to all the riders who injured themselves over the weekend, quite a few were seen wandering around in slings, while others suffered worse breaks. I’m sure many people who were at the race will be hoping Junior rider Joe Young has a speedy recovery as he sustained one of the worst injuries of the year when he crashed and severely broke his Tib and Fib in his lower leg.
The track chosen included classic Innerleithen as well as newer and fresher sections. The top half of the course was very quick for Innerleithen and traversed right across the hill at speed. The bottom of the track increased in steepness and featured a few tighter turns as well. Although the track was not super technical this seemed to add to the fun of riding it and as Tom Lamb put it, it was “easy to feel good on”. All in all the race seemed to be a favourite with many and left most riders keen to compete in SDA’s again in 2010.
Rnd 5 Results:
Juvenile: 1st Ross Wilcox 2nd George Gannicott 3rd Stuart Wilcox 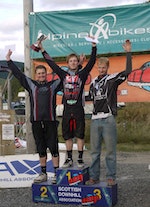 DirtTV: Rheola NPS Finals Video
We use cookies on our website to give you the most relevant experience by remembering your preferences and repeat visits. By clicking “Accept All”, you consent to the use of ALL the cookies. However, you may visit "Cookie Settings" to provide a controlled consent.
Cookie SettingsAccept All
Manage consent