Like a big dump of snow, Ace Woodley dumps a load of MacAvalanche photos for your enjoyment. 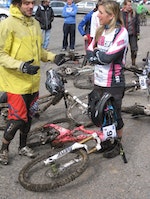 Took so many photos and not enough space to do them all,  some are crap anyway,  but found some more good ones. Hannah Barnes and one of the pink Oranges, loads of Orange5’s there this year. And then we have group C gathering to head up to the start line, this is at chairlift 2.

Random shot from the chairlift on the top of the DH track.

Joe Barnes and his Orange5, the winning bike, and a light weight build, Stan’s rims, continental tyres, looks like some XTR dive-train, fixed seat-post….this is a matter of debate, are gravity dropper seat-posts for everyone ? rumour was in the ladies final one jammed fully extended, many had them fitted from several brands from looking around at mud marks they all used them, handy yes, maybe the Mac-Avalanche isn’t long enough to worry about them. Joe ran fixed post, it’s a case here of finding the sweet spot of not so high you can do the steep start, but not so low you can still spin seated, mine was a tad high for the snow, but I can’t ride in snow anyway but was just right when I needed to spin.

This group of 3 is from Group A race run, the chap in green has just crashed, got up and tried to get going again, by know other riders are in shot and his big lead is slashed, Chap in green goes down again, his lead is gone, two pass him and while he tries to get going again more come into shot carrying more speed and pass, from a large gap to mid-pack in seconds, it’s a real lottery as to where you will finish.

Another Orange5 got loads of them.

The only hardtail, he made group B final, think he was called Luke.

Not so many full on DH bikes, most ran single crown forks, lots of burly coil sprung freeride builds as well as the lighter air sprung shorter travel bikes, YT Noton and check the hope 6pots on the Norco 🙂

Jonathan Sunter and Rich Thomas on Nuke proofs, few scalps in play and several megas, you can see Jon has used his dropper seat-post and bagged 3rd in group C.

Now a change of bike, Billy wanted a clear photo of the rigid raider, I only had muddy ones and the loverly snow photo, so what not to take to a mountain race.

2011 Surly Karate Monkey, 4130 double butted frame and fork, the 2012 versions no longer have canti/V brake studs. Single speed 34×18 gear, which worked out quite well, few more gears would have been better. Lightweight Gamut bash ring and 34t ring, only took a small hit, the dmr V12 was already broken and not race damage. It was surprisingly comfy, go faster and the wagon wheels start skimming other stuff, I assume this is why some claim a rigid 29er is like having a short travel bike, wouldn’t say that myself, it’s still rigid and you have to ride it as such and pick your lines carefully. As it’s a skinny tube set on the frame you get this “steel is real” vibe going on, the frame may not stand much abuse at this level but was quite comfy, my other steel hard-tails all have beefed up tube-sets to deal with higher speeds and bigger hits and stress that forks and modern riding dish out, they are different to alloy frames, more comfort but not like the Monkey, trade off is my 853 Superfly Styler will take much more abuse and last longer but less “feel” to it. After a good clean up and check out, had to check the head tube area as I burst the lower headset bearing, the frame has come through ok. The V-brakes…joke is the Gore brake cable set cost more than the brakes, and now after changing the brake pads over to cartridge pads, yeah a massive change in braking much improved over the softer DC pads, but scored rims. Impressed with the V’s, they did work, single finger braking but scary fast pad wear and a faff to keep checking them. I have some ideas on how to improve my Ghetto 29er for the Klunker challenge now.
One thing I will point out on 29ers is the frame size and front centre, if you run SPDs not really an issue as your foot position is fixed, but running flats you can buzz your foot with the front tyre when doing tight turns, I haven’t ridden a dual suspension 29er so am curious if the longer travel ones suffer this trait, a longer front centre/top tube will get round this and one of the reasons why 29ers work better for tall people.
I wouldn’t recommend doing this yourselves, i did it to try it out, I expected the wheels to collapse and brakes to fail, I had a 40mm stem and riser bars and just treated it like a big BMX bike, stacks of fun, would have been better in the bogs if I didn’t have the back wheel so far out, this was super stable on the DH track and Jeep track but not so good for lifting the front wheel in the snow and bogs, what came out as well was riding in snow, Joe Barnes went really wide and rode round the chopped up snow, hit untouched snow, ready to pull the front wheel up when you hit a soft spot and away you go, seemed to work out alright for him 🙂

check out www.nofussevents.co.uk for other races and info and www.glencoemountain.co.uk for uplift info

I really am looking at sussers,  might be on one before the year is out 🙂

The start list read like a World Cup this weekend in Leogang, Austria for rd#2 of the iXS European Cup. Greg Minnaar on his way to...

The start list read like a World Cup this weekend in Leogang, Austria for rd#2 of the iXS European Cup. Greg Minnaar on his way to...

If you fancy spending the 26th-27th of May riding a flash new bike, then get yourself over to Afan. There will be a wide variety of...

Anthill’s much anticipated new film ‘Strength in Numbers’ will be free to watch online tonight at 8pm tonight! And if you fancy seeing it on...

Strength in Numbers - Free Online Premiere
We use cookies on our website to give you the most relevant experience by remembering your preferences and repeat visits. By clicking “Accept All”, you consent to the use of ALL the cookies. However, you may visit "Cookie Settings" to provide a controlled consent.
Cookie SettingsAccept All
Manage consent