The phrase ‘the worst kept secret’ is overused, especially in mountain biking, but in this case it’s probably adequate.

I’m alluding to Josh Bryceland, of course, who confirmed he would not be racing in the World Cup series in 2017 this morning. It’s a real shame that we won’t be seeing his speed and personality at the races next year but from what we can gather he still has plenty of radness planned over the next 12 months. We can’t wait to see what’s next.

Plus he’s left us with a load of amazing memories from his career. We’ve followed Josh since we first gave him a cover in 2004 as a 14-year-old lad, through his rise as a junior talent up to one of the best riders out there today. 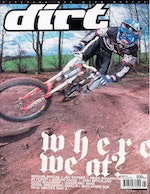 Here are our favourite moments from an amazing career in racing:

The 2008 Worlds from Val di Sole may have been the Sam Hill show, but Josh Bryceland also put in a stunning performance. His time smashed the Junior field to pieces (he won by 8 seconds over Sam Dale) and his run would have seen him in tenth place in the elites.

His Dad, Ian, said: “He was in a Slovenian hospital six weeks before being told he needed surgery and that his season might be over. Up at the top of the hill Josh was just cool as a cucumber and he said to me, ‘Don’t worry dad, I’m in the zone.’”

It’s just a shame he did it with that haircut!

It wasn’t only matter of time before Bryceland would start podiuming at Elite level and his first came at Mont Sainte Anne in 2011. He was second only to Gwin, who was untouchable all season on TWR.

It would be another three years until Bryceland finally took that extra step up the podium to claim his first win, but what a win it was!

For a man that loves it techy he couldn’t have picked a stranger place to win than Leogang. It’s just a shame he couldn’t remember the national anthem!

All together now: We rail berm in Leoooogang…

Josh Bryceland dominated the second half of the 2014 season with two wins and a second place. In the end a third place at Meribel secured the World Cup overall. It was enough to squeeze out Aaron Gwin and left Brook MacDonald to take his first World Cup win.

What could have been…

Bryceland ‘did a Hill’ and crashed within sight of the finish line to throw away his chance at the Rainbow Jersey. He was still fast enough to claim second but you could feel how gutted the entire downhill community was for Josh. Regardless of the result, the run remains a legendary display of bike handling.

Josh picked up his third and final World Cup win in Mont Sainte Anne in 2015. He won by 0.2 seconds over a chainless Loic Bruni.

Will this go down as Josh Bryceland’s last ever race on the biggest stage? Josh said he was “buzzing” to finish 15th here on one of the most brutal tracks going.

That if anything sums up the Rat, if he wasn’t the fastest rider at a race, then he was certainly the one having the most fun.

Race report: Forest of Dean Mini Downhill round 2 - Sheepskull
We use cookies on our website to give you the most relevant experience by remembering your preferences and repeat visits. By clicking “Accept All”, you consent to the use of ALL the cookies. However, you may visit "Cookie Settings" to provide a controlled consent.
Cookie SettingsAccept All
Manage consent