Next up is the first non-Brit of the series, Greg Callaghan. He’s based only a small hop over the border though and calls Ireland home. Greg has won hearts both sides of the Irish Sea though with his exploits on the EWS, most notably as the two-time winner of the Emerald Enduro. He currently rides for Cube but used to be a part of the Dirt/Norco set up in 2012/13 and got a top ten for us at the first ever EWS.

We sat down to chat with Greg about mountain biking past, present and future.

What achievement are you most proud of?
“Winning the Irish EWS”

Give us a story from your wildest moment in mountain biking?
“There’s been plenty of wild times. One that stands out I guess would be when I went to race the Enduro Des Nations in Valloire, France, back in 2012. We arrived late the night before the race so parked wherever we could and went to sleep.

I woke up to the van shaking, opened the door and saw Al Stock in stitches laughing. Turns out we were actually under the lift and the gondola was passing about 2 inches over the van. Luckily no one was in the gondola or the weight would have turned my lovely transit into a convertible.”

What has been your favourite moment of Dirt’s history?
“The coverage of “that” run from Sam Hill in Champery. I just remember staring at the pictures and trying to make sense of what was going on. Such a bonkers race.” How were you first introduced to Dirt?
“When I started riding it was just the mag to have, it was how you found out about what was happening at races and if you didn’t have it you were out of the loop and a plain old loser… Think my first issue was from Fort William world champs.” 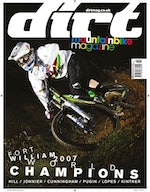 What would be the first question you would ask Dirt?
“How many tea bags have gone through the doors of that office over the years?”

What bike were you on then?
“A Raleigh Vulture briefly, until it snapped and then a 20 inch trials bike for a while.”

What rider or person has most influenced your career?
“He’s not a mountainbiker, but I’d have to say Joey Dunlop, the Isle of Man TT racer. He always kept it simple and did things his way without a big song and dance. He proved to me that where there was a will, there was a way.”

What has been your favourite or most memorable race?
“The Irish EWS in 2015, I won’t forget that one anytime soon.”

Who would you loved to have raced against or ridden with?
“Voulliouz and Peaty were always people I’d love to ride with or race against and watch up close, glad to say I got to do that before they retired this year. I guess that’s the beauty of Enduro, it brought the likes of Voulliouz back to racing.”

What’s your opinion on E-Bikes?
“Love them, I use one for training. It lets me ride twice as much downhill with the same effort as normal. They’re great for getting people on bikes too, the more people on two wheels, the better, if you ask me.”

What’s your favourite wheel size?
“29 is doing it for me right now. Haven’t looked back since I got on the big wheeler last April.”

What life lessons has Mountain biking taught you?
“That in the grand scheme of things, it’s just bike riding. The world will keep turning no matter what we do, so do what makes you happy…. and that chicks don’t actually dig scars.”

Who doesn’t get the credit they deserve in the industry?
“The photographers. The hours those guys put in during a race weekend is insane.”

What’s been the most questionable thing to come out of mountain biking?
“Fat bikes”

How would you change World Cup downhill?
“More natural, technical tracks and less bikeparks. Like the good old days of Champery and Schladming.”

What do you still want to achieve in mountain biking?
“Be World Champion.”

What do you want to see more of from the Dirt website?
“DirtTV, A Slice of British Pie and those kinds of videos. I’m a sucker for a good riding edit.”

What do you hope the next 20 years brings for mountain biking?
“Hopefully we don’t end up on bikes that ride themselves on trails resembling the M1. If it keeps growing the way it is then I could see mountain biking as a mainstream sport in 20 years. TV coverage, huge amounts of people on the trails, the industry getting bigger etc etc…”

Race report: Forest of Dean Mini Downhill round 2 - Sheepskull
We use cookies on our website to give you the most relevant experience by remembering your preferences and repeat visits. By clicking “Accept All”, you consent to the use of ALL the cookies. However, you may visit "Cookie Settings" to provide a controlled consent.
Cookie SettingsAccept All
Manage consent