The Reverb from RockShox is the benchmark to which all dropper posts aspire. 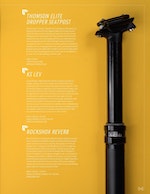 When RockShox first released the Reverb it really marked the point at which everyone (including the dropper doubters) knew that dropper seatposts weren’t just here to stay, they were going to be THE new thing to have. The big guns had officially arrived, and overnight the Reverb became the benchmark product. The early versions might have had their faults, and to be fair the Reverb still isn’t faultless in terms of reliability, but it has always managed to win us over thanks to the beauty of its operation. A Reverb is just a joy to use, it’s as simple as that. RockShox were also the first to introduce a ‘stealth’ post with a remote release that enters the very bottom of the post, making an already ‘slick’ post look and function even better. Occasional bleeding issues aside, this is a phenomenal bit of kit.

Deemax from Mavic comes with a hefty price tag, but it's oh-so worth it...

Solid and dependable, the Code brakes from Avid are just ridiculously powerful.

Zee brakes are pretty much identical to their big brothers at Saint, but cheaper...

Deemax from Mavic comes with a hefty price tag, but it's oh-so worth it...

Solid and dependable, the Code brakes from Avid are just ridiculously powerful.

Zee brakes are pretty much identical to their big brothers at Saint, but cheaper...

Find out why we love Shimano's XTR brakes.

The LEV from KS (Kind Shock) is, simply put, one of the best dropper posts out there. It's right up there with RockShox's Reverb.

Dirt 100 2014 - KS LEV Dropper Post
We use cookies on our website to give you the most relevant experience by remembering your preferences and repeat visits. By clicking “Accept All”, you consent to the use of ALL the cookies. However, you may visit "Cookie Settings" to provide a controlled consent.
Cookie SettingsAccept All
Manage consent