If it ain’t broke, don’t fix it. Orange’s 322 is simple yet effective. 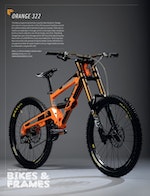 This bike just goes to prove how crazy the bike industry is. Orange were about to stop production of the 322 because it had been around for a while and they didn’t have time to give it a revamp. There was no need to do anything to it though, but for some reason bike companies find it so hard to obey the rule ‘if it ain’t broke, don’t fix it’. Thankfully Orange have seen sense though and for 2014 you’ll be able to buy the frame with a Fox DHX RC4 for a very reasonable price. Yes it may have been around for a bit, and yes it may be simple, but we still think it’s a very good race bike. It’s super simple to set up, mega reliable and easy to understand. Long live the 322.

Dirt 100 2014 - Specialized S-Works Stumpjumper FSR Carbon EVO
We use cookies on our website to give you the most relevant experience by remembering your preferences and repeat visits. By clicking “Accept All”, you consent to the use of ALL the cookies. However, you may visit "Cookie Settings" to provide a controlled consent.
Cookie SettingsAccept All
Manage consent