Our super stat man Mark Shilton’s number crunching from Vallnord has shown that consistency went out the window last weekend, and that can only be a reflection of the nature of the track. All the riders said they were loving the new track, a proper test, and that’s exactly what Mark’s stats seem to show. After all it’s far easier to be consistant on a track that isn’t really pushing you to the limit than it is to do the same on a track where you’re always on the edge. If you ask me all World Cup tracks should be like this. Anyway, over to Mark…

So Gee Atherton’s dominance of the season so far is ended by a small mistake on his part and an inspired bottom section of the course from Remi Thirion that put the Frenchman on the top step for the first time. Anyone who saw the race coverage could see without any special stats analysis how much quicker Thirion was as he hit the final sections before the line, but what the numbers do highlight is how he recovered from a relatively slow start to storm the win in Sector 3. Let’s take a look shall we?

Sector 1 was open, flat out and relatively short; less than 20% of the total race time for the winner. In this sense, there was still all to play for at this point. Over 80% of the course and pretty much all the steep techy stuff to go, but Gee Atherton had already opened an ominous gap on the field after just over 40 seconds of racing. Only Mick Hannah was within a second of him at this point with Neko Mullaly backing up his first ever top 10 qualifying position with a fast start in third place at split 1. From Mullaly back, the rest of the top 20 was covered by less than a second which further underlines Gee’s (and Hannah’s) speed on this top section. 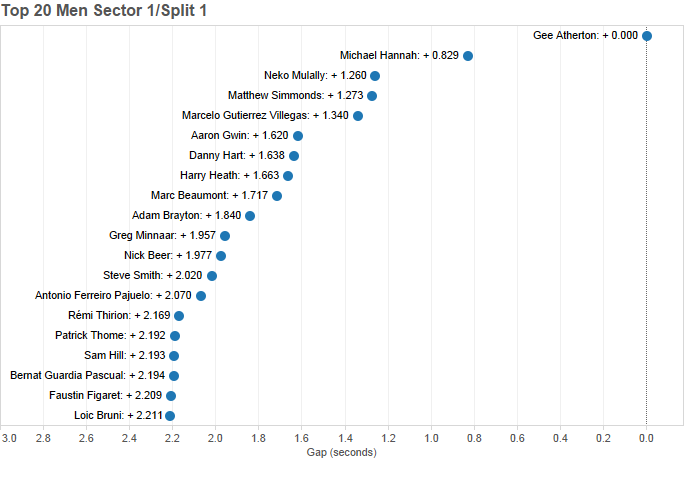 The most interesting positions lay at the back end of the top 20 though. Remi Thirion and Sam Hill had already given away over 2 seconds to Atherton by this point in 15th and 17th respectively. Quite a gap to have to pull back, even on such a steep and long track….

Sector 2 was where the track got steep and the different terrain is shown off by the switch around in the very fastest riders. Only two riders featured in the top 10 times in Sector 1 and Sector 2 – Gee Atherton and Danny Hart. Hart’s season hasn’t quite hit the heights he would have been hoping for so far but this consistency and 7th overall showed he’s still there or thereabouts and he was running in 4th place overall at Split 2.

All the fast riders in Sector 1 lost time on Atherton here and only Hill and Thirion could stick with him. Sam Hill went fastest with Thirion less than 0.2 seconds behind. Whilst they clawed back time on the rest of the field, Atherton was up there with them and consolidating his lead. These three went almost a second faster than anyone else at this point and were now in the top three positions at Split 2. Overall though, it was still Gee’s race to lose. About a minute left to race and more than 2 seconds advantage… 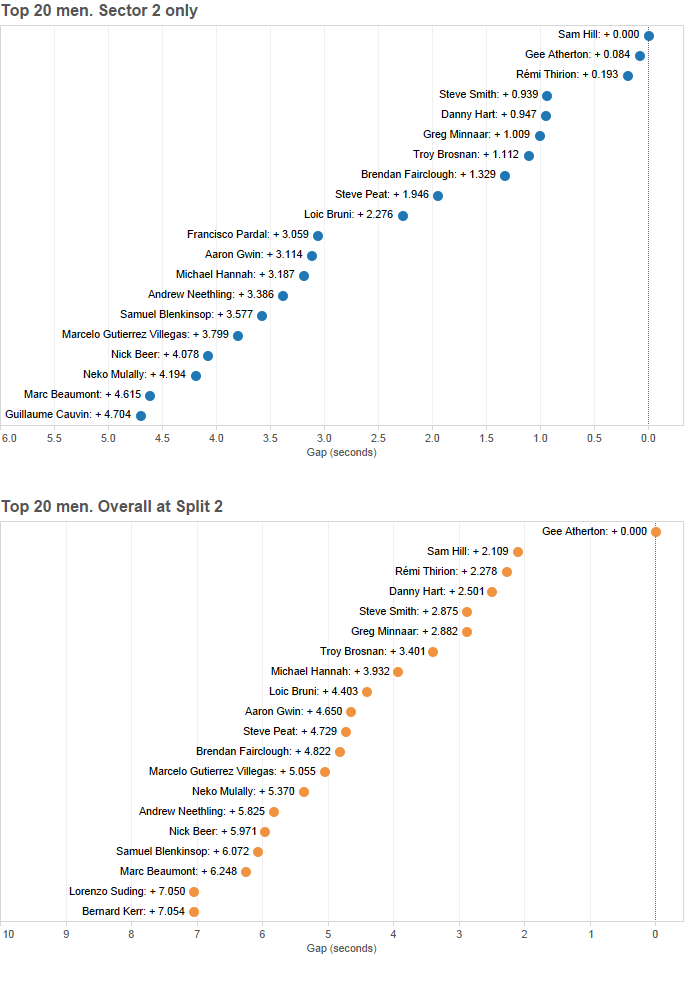 A mistake from Atherton and an inspired minute of riding from Thirion and the race was blown wide open. Gee’s little moment on the run in to the finish was well saved in the end, and but for Thirion’s heroics he could still have taken the win with a mistake that put him only 21st fastest in Sector 3. Thirion’s lower section was a sight to behold. Over a second faster than anyone else with a combination of creative lines and pure speed down the hill. The saying ‘you make your own luck’ seems very fitting – you could say he was lucky that Gee made the mistake that he did, but he still had to take some big risks to pull back over two seconds to overtake not just Atherton but Hill as well. Hill, the rider that Rob Warner claimed in the coverage “invented the inside line!” was thoroughly outdone in the line choice stakes and was almost 2 seconds back.

The other big winner on Sector 3 was Hill’s countryman and former team mate Troy Brosnan. He set the 3rd fastest time in Sector 3 which was enough for him to sneak past Greg Minnaar and Danny Hart to grab the final podium place as Minnaar and Hart could only managed 9th and 16th fastest respectively. 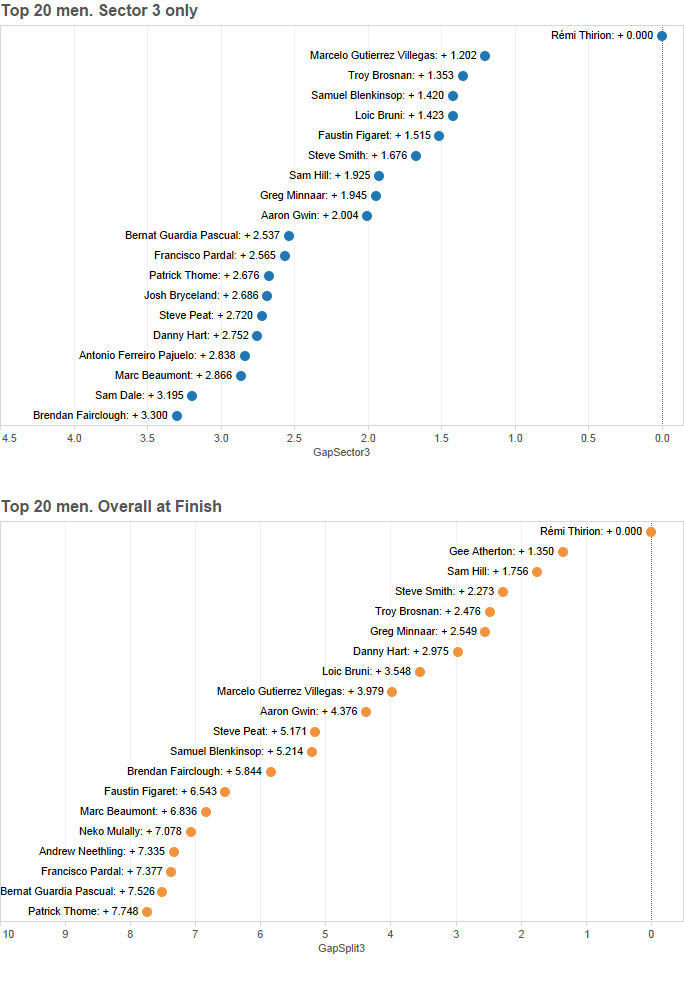 Bringing it all home

Whilst some tracks require pinpoint accuracy and the margins are super tight, here it was possible to make up time lost further up the track, and for even the most experienced of racers to make mistakes. Whilst I wrote in Val Di Sole that it was all about consistency, at Vallnord the very spotty heatmap (darker colour = higher placing. Lightest colour = outside the top 20) shows that no one managed to place in the top 10 in all three sectors. This means that the winner could take the hard route of giving a lead then rolling the dice to pull back the lost time. Luckily for Thirion that gamble paid off and he can now call himself a World Cup winner! 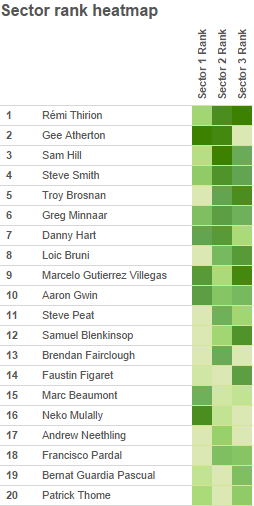 Mark Shilton has once again been crunching the numbers, this time from Mont Sainte Anne...

Can these get any more random/disturbing?

Mark Shilton has once again been crunching the numbers, this time from Mont Sainte Anne...

Can these get any more random/disturbing?

You might of seen Cam Cole's massive crash at Vallnord, here's an insightful blog from the man himself.

Vallnord World Cup - Team Videos
We use cookies on our website to give you the most relevant experience by remembering your preferences and repeat visits. By clicking “Accept All”, you consent to the use of ALL the cookies. However, you may visit "Cookie Settings" to provide a controlled consent.
Cookie SettingsAccept All
Manage consent