UPDATE: Tickets for the World Premiere are now Sold out!

If you are able to host your own regional Premiere, email [email protected]

Sharing ‘a brew’ with Steve Peat over breakfast this morning he shared a few details about the exciting plans he has in store. This lad never slows down, on or off the bike.

The film charting his long career as a professional mountain biker is about to be shown to the world for the first time. Clay Porter has taken on the job of documenting his hero’s rise to become the legend he is today; how he got there and what he’s been through. Peaty is arguably the most recognisable and certainly the most well liked downhill mountain biker of all time. His 20 year career has so many highlights that this promises to be an unmissable film. 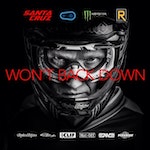 Clay and John Lawlor are currently locked away in an Irish ‘editing suite’ putting the finishing touches to the edit ready for the World Premiere. Where else would this premiere take place but in Steve’s home town of Sheffield. He’s taking over the Pennine Lecture theatre of Sheffield Hallam University on Saturday 7th December to let 500 lucky viewers see the film for the first time. There will be Steve’s own ‘Wont back down’ beers for sale and a gallery of some of the amazing photos of his life.

the trailer for the film will go live the same day over on the website wontbackdownfilm.com. The US premiere of the film will be on Friday December 13th at the Rio theatre in Santacruz, California home of Santa Cruz bikes.

In January a worldwide movie tour kicks off and Steve reckons the film will be available to download on Itunes and buy on DVD sometime in february. So you’re going to have a wait just a while longer to see if if you can’t get to a premiere.

Just from our brief chat this morning it was clear to see just how excited Steve is about this project. He hasn’t seen the final edit yet himself and may well wait until the World premiere to do so just so he gets goose bumps along with all the other viewers.

This one’s not to be missed. Get booking as soon as you can as this is guaranteed to be a sell out.

Check out what's inside this years Dirt 100

Dirt 100 2014: OUT NOW
We use cookies on our website to give you the most relevant experience by remembering your preferences and repeat visits. By clicking “Accept All”, you consent to the use of ALL the cookies. However, you may visit "Cookie Settings" to provide a controlled consent.
Cookie SettingsAccept All
Manage consent