Erm… What year is it? RockShox has today announced it will be offering coil versions of the Super Deluxe for everything from trail, through enduro to downhill.

That’s right, RockShox are making coil shocks for trail bikes. It shouldn’t be too much of a surprise though, coils have been steadily taking over in enduro for a couple of years. It was only a matter of time before trail bikes went the same way.

First things first, where has this come from?

Metric sizing was introduced roughly a year ago (on April Foool’s Day) and was an overhaul of standards for shocks. RockShox claims the new sizes allowed them to “ditch old design constraints” associated with cramming dampers into the old sized frames.

From there, their thinking shifted to other design constraints, why can’t the performance of a coil shock be matched to a trail bike? Surely pedalling compromise should be a thing of the past?

There are four models launched in the Super Deluxe Coil range. They will all use steel springs in 50lb increments from 250 to 650, depending on length. They will also all feature sag gradients printed on the shaft and external rebound adjustment to facilitate correct set up.

As it stands they will all be OEM only (which probably means some new bikes are inbound) but the rumour is after market versions are due to be announced in the near future.

Let’s take a look at the range: 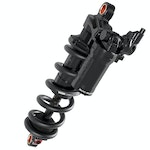 The shock that RockShox is hoping will revolutionise trail riding is the Super Deluxe Coil RT Remote.

Designed for trail and enduro riding, it utilises a native metric design, independently tunable compression circuits, check rebound and can be fitted with a number of mounting options.

It turns out remote lockout for rear shock is no longer just for those lycra-clad, XC bods (in fact, this has already been used by Cecile Ravanel in the last EWS season). It’s a two position system with ‘threshold’ making the shock firmer and the traditional ‘open’ mode allowing you to let rip.

It’s an incredibly simple solution (similar to what Scott has been doing with its Twinloc system) but we wonder if it’s truly necessary. At the moment we tend to just leave shocks in open mode, and an extra remote will only clutter up our bars even further.

This shock is pretty much identical to the RT Remote but without the remote. It still has the two position adjustment, you’ll just have to reach down to change it, making it harder to do on the fly. 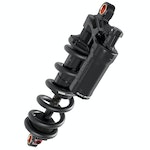 Finally RockShox has a replacement for the Vivid. It’s not that it was a bad shock, we just felt there were better offerings out there from the likes of Fox and Ohlins.

Truth be told, we have already seen this in the wild on Sam Blenkinsop’s prototype Norco downhill bike, but it’s nice to finally have some details. RockShox claims the Metric design has allowed them to make the shock lighter than ever before and more capable at the same time.

With external rebound adjustment and low speed compression adjustment, it should be a breeze to dial in. We can’t wait to get our hands on one.

There will also be air versions of the above three shocks. 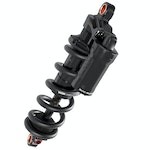 It really is a case of out with the old and in with the new as the Kage is also getting replaced with the Super Deluxe R.  RockShox claims this will be made to fit anything from trail to downhill bikes, making it a truly versatile piece of kit.

It’s worth noting that this doesn’t come with the pedal mode but it should save you a bit of budget and it’s probably not the biggest compromise in the world.

Are coils always better? Not necessarily. While they are said to offer advantages in terms of suppleness and damping, they don’t have the same ramp up as air and (generally) weigh more. They are also less adjustable on the fly – instead of whipping out a shock pump, you’ll have to buy the right spring for your weight, this could cost anywhere from £30-£100.

In reality it’s probably just another option for riders, which is no bad thing in our book.

The team take on the mud of New Zealand.

Norco Factory Racing - EWS round 1 Rotorua
We use cookies on our website to give you the most relevant experience by remembering your preferences and repeat visits. By clicking “Accept All”, you consent to the use of ALL the cookies. However, you may visit "Cookie Settings" to provide a controlled consent.
Cookie SettingsAccept All
Manage consent