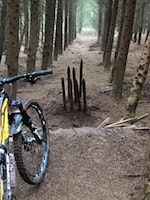 It shows a jump with pointed stakes hammered into the ground on the landing. Someone has clearly gone to a lot of effort to cause harm here and we’re not exaggerating when we say this could easily kill someone. It’s doubly scary when you consider we’re getting into night riding season.

The stakes were found on Old Pale, near Delamere. The trails aren’t official but they are tolerated by the Forestry Commission and infrastructure has been put in place to prevent trail conflict. However, this clearly hasn’t been enough for somebody.

This particular trail doesn’t look like it’s ridden that often but Twelve50 has told us that’s just because it’s a larch forest (deciduous) and the needles are dropping this time of year.

Thankfully the stakes have been removed now. The Forestry Commission has understandably decided to remove the jump because ultimately, if something like this happens again, it’s on their head.

Twelve50 said on Facebook: “The vast majority of walkers, horse riders co-exist happily and share the forest without problems. However, it seems somebody has an axe to grind and has taken matters into their own hands.

“Obviously the consequences of riding into this don’t really bear thinking about.
If you use the Forest and these trails in particular, please keep your eyes open and take care out there, especially if night riding. “

This case becomes all the more scary when you consider a cyclist was killed in Delamere 16 years ago, possibly by booby trap.

Gary Meadows’ front wheel dropped through a hole covered in sticks and leaves and he broke his neck. He was pronounced dead on arrival to hospital.

Although the pit digging and camouflaging is highly suspicious, the coroner said it was not possible to say for certain that the hole was intended as a booby trap.

We’ve also seen photos of boards filled with screws placed at on a fireroad cut at Swinley Forest. They were placed near the start of the Seagull trail in the Crowthorne / pips seat / underpass area.

David Corless, the rider who found them, said: “I doubt that this is the only one. This is the next level on from trees across trails (someone has intentionally set out to damage riders property) and the kind of bell end that does this may move onto wire / ropes across trees.”

Thankfully nobody was hurt in either of these incidents, but it’s scary to think what could have happened. Stay safe out there folks. If you see anything like this on your trails report it to the landowners and Police as soon as possible.

What the fuck was the driver thinking?

Going in for the kill. British made 160mm raptor

One of the most iconic brands

20 years/ 20 questions - Kona
We use cookies on our website to give you the most relevant experience by remembering your preferences and repeat visits. By clicking “Accept All”, you consent to the use of ALL the cookies. However, you may visit "Cookie Settings" to provide a controlled consent.
Cookie SettingsAccept All
Manage consent