This is what I love about racing and interwebs, Maribor World Cup news one day and cake race news the next day. Attention might be focused on the WC stars at the moment but grass roots racing is still going strong.

One example is Mr Bling’s Race Series at Porc.

Dirt-Your-Neck-South-East-Commander Rod Fountain sent over this info which I thought was great. 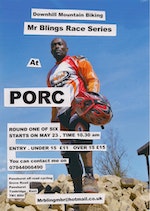 A bit of context: Mr Bling, aka Richard is this larger than life character who’s the wrong side of 40 who used to tank around South London years ago on an Iron Horse. With a bike like that and character to match he pretty much got to know everyone. He’s bonkers in a Chris Akabusi way: overflowing with enthusiasm and love for the scene. We offered him a drink at the pub once and he said ‘I don’t drink, i just love the pussy!’ Fair enough.

Anyway, he’s since moved to Hove and taken his enthusiasm with him. He’s soooooo into the idea of grass roots racing that he’s organised his own race series at PORC, just for the love of it. Without sponsors he’s put up prizes, trophies and has even got some massive pic on his van and is deliriously happy about the whole thing.

Here’s the info’ that he gave me, in his hand:

“Mr Bling’s Race Series at Porc , round one of 6. Starts 23May 2010, 11.00am start. Mikrotime are doing the timing. Under 15 £11 and 15 and over £15. Putting PORC back on the menu. Mr Bling is looking for sponsors to help keep this event running for a long time: this track is a track for all. The event will be filmed by remote control helicopter if the weather is good , strong wind or rain could stop this.”

I think you just call Mr Bling to enter, check the flier for details.

Spank are claiming their new rims to be a revolution in the way we think about hoops. Whether they are or not is of course...

Woburn Sands has been around for a long time, some of the best riders in the world have ridden and still ride there. It’s seen...

Halo BDS round 3 kicks off at Llangollen on 26/27th June and the organisers are giving you the chance to walk the track with Brendan...

Spank are claiming their new rims to be a revolution in the way we think about hoops. Whether they are or not is of course...

Woburn Sands has been around for a long time, some of the best riders in the world have ridden and still ride there. It’s seen...

Halo BDS round 3 kicks off at Llangollen on 26/27th June and the organisers are giving you the chance to walk the track with Brendan...

The Mpora iPhone app has just been upgraded allowing anyone with a 3GS or iPhone 4 to upload video from their phone direct to their...

Fort William World Cup Team Videos
We use cookies on our website to give you the most relevant experience by remembering your preferences and repeat visits. By clicking “Accept All”, you consent to the use of ALL the cookies. However, you may visit "Cookie Settings" to provide a controlled consent.
Cookie SettingsAccept All
Manage consent