The blue was spreading up my left hand as I moved the gearstick into ‘park’ mode outside the hotel in Embarcadero, just underneath the San Francisco- Oakland Bay bridge. My heart suddenly pumped a few more rpm’s but nowhere near what it had been put through a few days before up in ‘Gold Country’, four hours north east of here.

At around forty five minutes, the downhill stage of the Downieville Classic rates as one of the all time best runs on a trail bike mixing terrain, speed and altitude as it tracks the Pauley Creek under Sierra Buttes. I wont forget Brian Lopes coming past me on the five minute climb and the awakening that the transition from lung busting climb to wide open hundred mile an hour descent into ‘Third Divide’ brings to the senses. Or that bruising that was spreading in my hand the result of full on high-speed rock hits.

Of course I’d heard of the other side of the mountain many times. I’d seen the Sierra peaks rise above Packer Saddle at the start of the Downieville race and remembered thinking I would take no convincing that this was one place that simply had to be explored one day.

A few weeks ago that day arrived. I’d pulled into town a day early on account that I had to leave a day early having the 400th anniversary of my street to get back to. Sean, my taxi driver asked how I’d have liked to have been one of those pioneering people that took a stagecoach into these hills back a hundred and fifty years ago in search of gold. I told him to step on it because there was riding to be done – but still one of the most fascinating divers I’ve ever travelled with.

Clear blue sky, intense heat and fully embracing forest aroma was intense on the nose and instantly worked its way into my heart and lungs as I realised my location as I woke on day one. We’re hauled up in a bunch of log cabins in a clearing in the woods. There’s no internet, there’s no phone signal, there’s no noise. But there’s an eight thousand foot hill above me with my name on it. Sean Estes throws me some pedals, and within minutes Joe Buckley, Sam Benedict and Todd Cannatelli are circling me.

There’s no uplift – just to be clear. The temperature feels like it’s in the hundreds and the altitude already pretty high as we begin the climb out of Graeagle Lodge. It’s nibbly, mostly rocky but never too steep to keep turning the pedals. The mountain air purging my body and emptying it of any water left. It feels amazing and painful. My excuse is that I have a heavy Cannon body and a couple of lenses holding me back. The truth is I have a couple of murderous colleagues on this tour hell bent on making the most of the mountain. And getting the climb done as rapidly as possible it seems.

It doesn’t take much time to reach Long Lake, cupped by the mountain, clear as a bell as the land opens out behind us. We skirt the lake slowly, picking our way through the rock, some hike-a-bike and up onto the smoother slopes where a single track screws its way to the summit. At about seven thousand feet I’m really puffing and the heat ain’t exactly helping. Todd is close by.

It’s a long way down from Mt Elwell summit, that’s something you can see clearly from the top. And its from here that we spend a few minutes happy in the knowledge the climb is done and there’s some packs of crushed biscuits to munch on as we survey an impressive three sixty view of the Sierra’s – no houses, no cars, no flight paths. 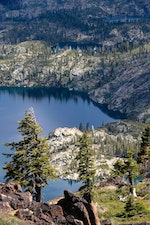 Its pointless thinking that’s its going to be a smooth ride at this kind of height and within seconds the Stumpjumper is slightly out of its depth in the deep unforgiving rock as holding or even spotting a line is challenging. Its loose too. There’s no room for error and the unmistakeable noise of someone closing in behind doesn’t help as the sound of Buck’s tyres as he reels me in as I make a real meal of these upper sections. Not that there’s a section so to speak for it’s pretty full on without let up.

After a minute I fear its going to be a bloody drop to Graeagle. So many times a trail gets built up as a ‘best ever’ when in reality it’s a case of twenty five percent gold mixed in with seventy five percent iron pyrites. Large percentage forest road, clanky switchbacks and mediocrity is something all too often served up on so many mtb trips. Still, I don’t want to fall off early doors.

And then, as I was about to begin flirting with downward spiral territory, a door opened into a whole new world. The corners loosened up, the ground grew some soil content, roots became prominent and the speed was turned up by many, many knots. Suddenly the four of us are trucking on, looking ahead spotting our lines now. Instantly there is even less room for error as we hold high speed lines through big country on super-strung singletrack that never tightens, the trail always keeps moving.

There’s carnage all around but somehow the trail is the perfect mixture of rock and root of just the right severity that doesn’t take speed but is still a challenge for line choice. Its still a main line a few feet wide so there’s no mistaking which direction to go in. Keeping momentum is simply automatic as the trail drives you downwards. The bike is now very much in the right place and the grip is outstanding.

I many ways its different to the Downieville descent. That starts with man made corners before dropping into straighter high-speed stuff with frequent flat spots. Downieville takes strategy, it demands lung power. Mt Elwell is a different art, a wilder beast.

Velocity in tact, with confidence rising by the second it becomes paramount to have your wits about you for stumps and sniping rocks. But they never show and the trees are wide spaced anyway. We wonder about the moss line on the trees which starts at about eight foot – this must be the height of the snow in the winter months up here.

At about the half way mark it gets wild, Buck comments that what’s ahead is his favourite part of the track and it truly delivers by the coach load. This is pure arcing heaven at just the right gradient with just the right technicity. Even riding unsighted the flow is easy to find and still there is never any break to the momentum.

We’d been dropping off the mountain for about thirty minutes when we pulled over as the trail flattened for the first time. Benedict shouted there was a short climb and we minded not given what we’d just been through. It wasn’t short. But still it was only five minutes.

Shortly after I wilt in the heat for five minutes after that climb, we ride what must have been two hundred yards of forest road – the only part of the whole descent – before the trail tips into its final act. And I’m sure its where railing corners must have been invented, this was simply nuts. Its now hotter, dustier, faster and smoother. The conclusion is epic. We roll into Graeagle. Grinning.

THE RIDERS
The team of riders are all work for Specialzed bicycles in Morgan Hill, California and had been out here on a team building camp. I was lucky (and unlucky based on their acclimatisation) to have ben able to ride with them for a few days. What I learned of them in the time I was with them is that they can all put the hurt on, they can all ride any terrain, but ultimately they are a totally easy to get along with bunch of blokes. They like a beer, they like a laugh, they like going as fast as humanly possible. They stayed next door to me in Wales a few years ago, this was their turn to show some local stuff.

Sam Benedict gets the award for biggest muscles, tightest post ride shorts and t-shirts. He also gets to the tops of the hills quicker whilst still being clipped in to his pedals. I can thank Sam for introducing me to one of the finest drinks on the planet – Horchata – a mix of rice milk, cinnamon, and ice with a dash of carnation milk.

Todd Cannatelli stayed close by me on the short climb to the top of Elwell but seemed to have no such interest as the trail started to drop as can be seen from the way he was ripping the turns. Todd joined me for a desert at the base of the mountain and not once could I catch him double parking on the beers.

Joe Buckley was the man that got the guns out on what was possibly the wettest day in Californian history the day after our tour of Elwell. ‘Buck’ was once Shaun Palmer’s mechanic but judging by the pace of this man I think today the roles would be reversed. His dad once cut firewood to supplement the family income, his instagram pic’ of his house back in the day is stuff I can only dream of.

THE IDEAL BIKE FOR MT ELWELL
At the summit I fully believed to be under-biked but those thoughts didn’t last long as we began dropping into all time classic singletrack. Any 140-160mm bike with good integrity would be just right on this trail, obviously we are going to pick the Stumpjumper as our bike of choice on this occasion as its angles, travel and suspension. And very nicely modelled here by our host Sean Estes.