It’s amazing how easily the best adventures can go forgotten, but every now and then what you anticipate to be another day out in the hills can become an experience that you will remember for life.

It had been a couple of years since my last trip to North Wales, the distraction of high Alpine peaks and promised foreign lands leading me away from the mountains that first inspired me to pursue an outdoor life way back when, but recently I had the opportunity to head back north and to explore a little more of my home country. It’s amazing how easily the best adventures – often the ones sitting right under your nose – can go forgotten, but every now and then what you anticipate to be another day out in the hills can become an experience that you will remember for life. I never anticipated this particular trip to be anything beyond the norm, however with a healthy dose of Sense of Adventure combined with the ever-seductive appeal of new trails, soon I found myself on one of the better trips of recent times – and it was so close to home.

I was in North Wales, just a stone’s throw from Snowdon – the highest peak in England and Wales – and on the scent of quality mountain biking. I had heard the rumours, I knew that mountain biking had developed exponentially since my early visits to the area as a teen, but I had little idea of just how good the trails would be. I gave an old friend from the downhill racing circuit, James Hughes, a shout, and before long we were deep in discussion – mostly on the subject of whether we should go for heated seats or not. We had the privilege of test driving a Jeep® Wrangler for the short film that you can see on this page, and for the cameras of Aaron Bartlett and Jacob Gibbins – two regulars on the mountain bike filming circuit, and two poor souls who had to suffer the inconvenience of an open hillside while James and I enjoyed the luxury of the Great Indoors. Being invited on a shoot for an ad such as this is honour enough, but to also be discovering, or at least rediscovering, such a stunning corner of the country for the sake of hunting trails… well; I was a happy mountain biker.

After a certain amount of scouting around, and James showing me some of his favourite hillsides and valleys – he’s North Wales born and bred after all – we headed slightly more off the beaten track and decided to test the vehicle’s limits (which, naturally, we never even came close to – although my ‘slightly exaggerated’ heroic 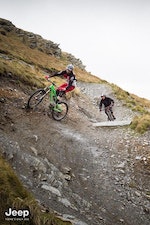 tales of off road supremacy will likely never be tested).

It was cold outside and we had a Jeep®, so what were we supposed to do? I certainly wouldn’t blame us for staying in comfort, bikes at the ready in the boot, on a reconnaissance mission around the forests and peaks of one of Britain’s most inspiring areas of countryside.

It is of course true that one must consider where and how one drives in such an area of natural splendour, and I do not want to create the impression that we rampaged across every open hillside and tore through every copse going, so I’ll first give a disclaimer that we had pre-planned to some degree where we were headed, and eventually we came to a private enclosure on the fringes of the old mining town of Blaenau Ffestiniog, the aptly-named (funnily enough) Antur Stiniog. It was once on the property of Antur and away from the roads, that we started to scour the area for trails, a natural habit of any discerning mountain biker. James, although having ridden the trails of Antur Stiniog previously, hadn’t had the chance to truly ‘get out there’ and recce the hills around the area, so it was with great anticipation that we made our way over every crest and into each small valley.

They say the adventure is in the journey, and in this case we were having almost as much of a good time driving round the hills as we were in our search for bike-able terrain – given that we had a four-wheeled toy to play with, this is perhaps not incredibly surprising.

Eventually our time was up and the elements simply had to be faced; we were atop Antur’s peak and finally at the summit of what is reputed to be a great trail. It was time to ride. Jumping down from the Jeep® and into the brisk air, our senses were ignited (I’m exaggerating as it was kind of a full-on assault – freezing!). From our final vantage point and for as far as the eye could see were mountains of varying proportions, the high points still displaying a sprinkling of snow. But we turned away from Snowdon and headed off the side of our hill down toward Blaenau. Slate piles on the left, high peak on the right, never ending view to the sea straight ahead; this was a true scene of majesty and a spectacular setting for a rampage down the purpose-built and testing (of both body and bike) Black-graded downhill track. Tucking in behind James I knew things were about to get rowdy.

With a succession of gap jumps, banked turns, steep drops, and never-ending rock gardens, the track we rode, which I later found out is to host the first race in the British Cycling Downhill Series (BCDS), was nothing short of bonkers, especially in that wind. But that’s what makes the ride so much fun – the element of risk. James and I were hauling by the time we’d pedalled around the mountain for a few laps of the track, and James was beginning to fancy his chances at the aforementioned BCDS event (I found out later that he was, in fact, already entered into it – it takes place this weekend). Following him down the track at full-tilt I was also feeling confident of his odds for the race; I’ll have to see how that one goes for him!

Riding new terrain is one of the highlights of mountain biking, for me and for most other riders. The beauty of the sport is that everywhere you go, every weather condition you encounter, and every turn you take on the hill, there are always differing ground conditions and obstacles to work your way around or over, sometimes a little more unexpectedly than you’d perhaps like. It’s not exactly a case of ‘throwing’ yourself down the mountain, it’s a bit more learned than that, but reading the terrain and reacting to it is so much fun, such a buzz, that it pushes people like me into what can often become a life of searching. I’ve travelled far and wide and to every mountain range in Europe on my hunt for fresh trails, I’ve become so hooked that it’s even become my job – in a roundabout way at least. It’s a never-ending process but that’s what’s so great about it. So on riding Antur Stiniog’s steepest trail I was simply thriving on the experience.

Riding new terrain is one of the highlights of mountain biking, for me and for most other riders. Unfortunately what goes down must pedal back up again, which was eventually the case for the two of us. Once we’d had our fill of fresh Welsh trail, we scouted out a climb that pointed up back in the direction of the Jeep® and took the opportunity to appreciate our surroundings at a slower pace. That’s the great thing about modern mountain bikes: you can thrash them all day long on the most severe of downhills, smash them into turns, even throw them at huge jumps, but at the end of it all you can push a button on the handlebars that raises the seat to a comfortable height, you can flip a switch that firms the suspension, and hey presto! you’ve got a bike that’ll climb back to the summit efficiently. In this case, however, the two-wheeled vehicle of choice was perhaps at the mercy of a slightly less versatile pilot, who’d been riding his socks off just a spot too much on that day… Eventually we crested and threw the bikes back in our sacred, four-wheel drive shelter and made our descent of the hill, back to the civilities of the village and to a much-deserved after-ride meal of the heartiest proportions. The ensuing feed is another of the great reasons to get out into the hills for a day of exploration and bike riding, by the way.

Check out the Jeep® Wrangler Polar special edition in various challenges against a professional snowboarder:

Jeep® heritage was born out of World War II when the US military called upon vehicle manufacturers to bid on the production of a ‘light reconnaissance vehicle’. The Willys-Overland Quad triumphed and this rugged quad, which soon became known as a ‘Jeep®’, rapidly became an iconic vehicle of the 2nd World War. The origin of the name itself is debated. Some claim it to be a slurring of GP, the military abbreviation of General Purpose, while others say it was named after ‘Eugene the Jeep®’ from the popular Popeye cartoon.

Following the war, Willys trademarked the Jeep® name and diversification of the military quad began, starting with a humble off-roader for famers. Jeep® has since passed through the hands of Henry J Kaiser and American Motors Company (AMC) before finally residing with Chrysler’s Jeep/Eagle Division in 1987. These years have seen Jeep® continue to strive to set the benchmark for authentic sport-utility vehicles (SUV), reacting to the growing market for compact everyday practicality coupled with a consumer’s desire for the creature comforts of passenger cars. Jeep® have built upon seven decades of legendary heritage, developing their brand to deliver a blend of on-road refinement and off-road capability, all the while paying homage to the history of Jeep® and an icon of the 2nd World War.

Climb aboard and let yourself be surprised by the Jeep® Wrangler – The Original Freedom Vehicle.

The smallest of details are made ​​with greatest of  care so even the shortest journey will be in maximum driving pleasure and comfort.

The Jeep® Wrangler comes with finely designed details that combine form and function, with its traditional round headlights and seven-slot grille. It is available with 2 or 4 doors and comes in three trim levels-Sahara, Overland and Rubicon.

On the road or off-road, Wrangler helps you to overcome any challenge Mother Nature puts in your way.