a mountainbiking video by jonesdirt

The new Giant Reign 2016, a top bike on so many levels still sends out a few mixed messages as to its true character.

There’s absolutely no doubt that the new Giant Reign has some hefty ambitions. With its wide bar, big discs, fat tyres and chain device it demands to be ridden hard. Its shape and purpose is very much about enduro and trail – if there is a distinction between the two – and its 160mm travel with geometry weighting slightly more towards descending enables it to carry out those tasks.

Yet there’s a side of this bike that maybe suggests it’s more of an all-day bike than simply a charger. The lightweight DT1501 wheels made us wince at first but as we were to find out there was little to worry about. Component wise its all good stuff here, as to be expected though for a bike touching £4000. Sram Guide brakes, the Reverb Stealth and an eleven speed X1 drivetrain deliver reliability.

The Maestro suspension design has always been one that has stood up well to a beating, yes we’ve had to bring is some heftier shock tunes on previous models but once sorted its been a simple and efficient system. This time out the Monarch Plus has had some love put into it and delivers an impressive amount of grunt, and it uses its 160mm well. Not all Monarch’s have been so beautifully set up on other bikes so far this season but the Reign is certainly one of them so credit to whoever has been involved in this area. We opened the damper up to reveal no red spacers and so we popped in three just to see what the effect would be. Up front Giant have gone for a custom offset of 46mm on the Pike RCT3 fork but we were keen to experiment with different offsets. 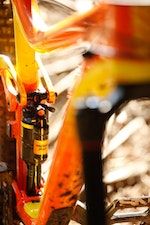 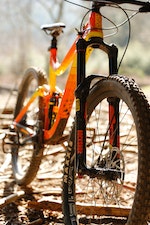 Across the ground and down the hills this bike has impressive pace to it, no doubt helped by the light wheels, but it has a real liveliness to it. It weighs in at around 30lb but dances more like 27lb. The shape is enables full commitment, the suspension both front and rear delivers punch, but more than this it makes its mark well when transferring from areas of tougher going – from A to B on easier terrain its lightning quick.

The silence of the Giant Reign is a relief and so is the sizing. A six foot rider will fit a large well. But there’s still some mixed messages going on here. If taken into harder terrain and used more as an enduro stage bike there’s still a doubt if those light DT wheels would hold up. We rode it hard and they held up very well. Maybe this is partly because it has been ridden in softer UK weather on not so rocky terrain.

Its in this environment that we found the fork a bit vague. The steering and weight distribution was at times tricky to find. On several occasions the rider balance point was incorrect. However when the bike was put into steeper terrain the fork felt spot on so in that respect the custom offset was the right choice. That said we swapped the fork out to a standard offset Fox 36 and found the all-round performance better on some of the less demanding uk terrain, and certainly on more singletrack style riding.

Overall a great bike, huge fun and one that will appeal to many riders wanting good geometry and componentry with a workhorse vibe.