Run to the Hills 2013 fuelled by XS Power Drink finished up with all the teams arriving at the Dirt office last night. After a week of late nights and early mornings (for some) everyone was pretty tired and battered from pinning it for 5 days solid. It seems coming to the Dirt office in deepest South Wales was a dream come true for a few riders.

With a lovely spread put on at Dirt HQ all the riders enjoyed a nice brew and a catch up on what they have all been up to this week. The DMR Team were first to arrive closely followed by the Dirt Norco boys in the big bus, Hotlines rolled into Dirt HQ next and after a bit of a Sat Nav malfunction the Saracen crew dropped in.

Mike Rose keeping an eye out for the teams arriving.

With tea being drunk and stories being exchanged it was only a matter of time before the Dirt HQ toy box was opened. Ed built this bendy bike you may remember from our Cycling to Work – Dirt Style video from, wait for it, 6 years ago!

Chris Seager gets confused as Ray Samson looks on.

Still the master, Ed shows how it done.

After the bendy bike was put to bed all the teams headed off for some well earned rest, a lot of food and no doubt a beer or seven. 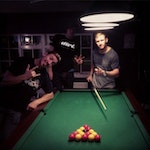 Time to chill out for Team Saracen, now where is the white ball?

Today all the photographers are editing together their slideshows for the rider party tonight. All the slideshows will be judged by the Dirt team with edits dropping online soon for you to cast a vote on your favourite edit.

And to finish Team DMR had one last firework!

DirtTV: Enduro World Series | The Finalé
We use cookies on our website to give you the most relevant experience by remembering your preferences and repeat visits. By clicking “Accept All”, you consent to the use of ALL the cookies. However, you may visit "Cookie Settings" to provide a controlled consent.
Cookie SettingsAccept All
Manage consent