Day three strikes for team Hotlines on XS Power Drink’s Run to the Hills. It seems yesterday in the quarry was a winner for the riders so they headed for South Wales and found another one! The weather still seemed to be against the team and the famous Welsh rain came to haunt them.

Chopper summed up the day in one/four photos.

With a quarry being the order of the day it was time to get the big bikes out again and hit some hucks! Rampage practice was in full swing and the downhill boys are giving as good as the dirt jumpers down in Wales. It does seem however that things got a little sidetracked last night…. 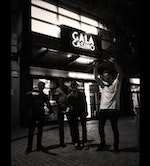 Might winning on the roulette tables give them some luck in Run to the Hills?

Chopper getting some quality time with the gamblers.

With two quarry days done the team are keen to hit some dirt so they are heading deeper into Wales tomorrow for some more riding. We are hoping that they get in a few better shapes than Joe Smith did yesterday! Catch up with what went down tomorrow evening and make sure to hit that hashtag #dirtrtth.

Joe Smith getting it a little bit wrong in the quarry yesterday.