It’s the end of day two and Dirt’s Run to the Hills fuelled by XS Power Drink is now in full swing. Team DMR have been on a mission to London today and as well as taking in the sights of Trafalgar Square they got some riding in. The guys seem to either have a penchant for a Twitter based wind up or they have some serious plans for their week long filming trip. After yesterdays shot from an aeroplane today Aspect Media decided to post a photo first thing of a couple of rather posh motors and a big chopper.

Bulls**t or genius? You decide.

With the full team in tow, after Fairclough and Reynolds made it back from the Motocross of Nations in one piece, it was decided that a day out in London would be a good opportunity.

Mr Olly Wilkins adorned the cover of Dirt #101 on a BMX track and we are hoping he will bring that Moto look with him on this trip too. What they got up to at the track is mystery that will either be revealed at when the edit and slideshows drop or forever be resigned to the cutting room hard drive never to see the light of day. Guess we will just wait and see. 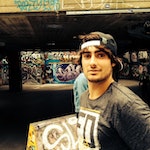 After the BMX track it was into the big city for some street riding, what better London street spot to hit than the SouthBank. Tourist dodging and posing for photos (see above) was the order of the day here and by the looks of things they shot some pretty good stuff. Getting a tuck on under the roof of the Southbank.

After some street riding there is only one way to refuel, Burritos! So the guys headed over to their favourite hangout and filled their bellies ready for the train home. If you look carefully you might see a few World Cup invaders in this shot. Very rude Mr Kerr, should stick a Needle in that.

Tomorrow is another day for Team DMR and with some loose plans floating between the Mexican food we look forward to another instalment from the guys tomorrow.

Make sure to hit the hashtag #dirtrtth to keep up with whats going on.

Enduro World Series: Quick Pit Randoms #2
We use cookies on our website to give you the most relevant experience by remembering your preferences and repeat visits. By clicking “Accept All”, you consent to the use of ALL the cookies. However, you may visit "Cookie Settings" to provide a controlled consent.
Cookie SettingsAccept All
Manage consent