Really interesting one this one. Tracy was right at the top of the game in what was probably the most competitive era in women’s downhill and came away with 17 (or was it 16?!) World Cup victories.

She followed it up with a legendary career in enduro and remains one of the most insightful voices in the industry to this day. 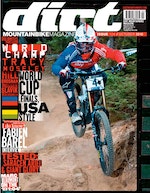 Her career got off to a flying start when she was picked up by Volvo Cannondale as a junior. Racing on what seemed like space age technology at the time drew envious looks in the Nationals pits and marked her out as one destined for bigger things.

A break in her career followed as she enrolled at university but then she was drawn back by a deal with Kona in her final year of studying.

It took Tracy a few years to break the code and claim her first win, mostly due to the all-encompassing shadow of Anne Caroline Chausson. When Tracy did start winning though, it was hard to stop her. Her rivalry with Sabrina Jonnier probably remains the fiercest in women’s racing history but 17 times she came out on top.

In this chat we discuss the state of play of women’s downhill today, the tracks of the World Cup circuit (including one Tracy herself wouldn’t fancy racing) and her own racing memories.

A full overhaul for one of the original trail lids

Stay in control with the latest from TRP, Ritchey, DMR and Ergon

Pre season gains from across the pond

California Dreaming w/ Trek Factory Racing and Greg Callaghan
We use cookies on our website to give you the most relevant experience by remembering your preferences and repeat visits. By clicking “Accept All”, you consent to the use of ALL the cookies. However, you may visit "Cookie Settings" to provide a controlled consent.
Cookie SettingsAccept All
Manage consent