Trek really have got the mix right with this Slash 7 – the culmination of several bikes’ worth of experience. 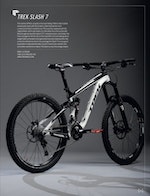 Trek started off their assault on the hard hitting 160mm bike market several years back with the Scratch, a bike that was far more cumbersome that it needed to be. That was then replaced with the original Slash, which was better, but still a little bit on the portly side. Now though we have this latest 27.5” wheeled version, and finally Trek have managed to hit the nail on the head. We’re not just talking about weight either as tweaks to the geometry have also improved the ride, as has the refined rear shock. As a package this Slash 7 is a very good proposition indeed and this bike is proof, if ever it was needed, that some bikes need time to mature. This Slash is a very fine vintage indeed.

BTR’s Ranger is a true handmade frame from the UK and we love it.

Want to know what are the best enduro mountain bikes to buy? Well these are the ones that we've found to be the cream of...

The Spider 29 from Intense is, simply put, a ridiculously fast trail bike.

BTR’s Ranger is a true handmade frame from the UK and we love it.

Want to know what are the best enduro mountain bikes to buy? Well these are the ones that we've found to be the cream of...

The Spider 29 from Intense is, simply put, a ridiculously fast trail bike.

Dirt 100 2014 – Orange Five RS
We use cookies on our website to give you the most relevant experience by remembering your preferences and repeat visits. By clicking “Accept All”, you consent to the use of ALL the cookies. However, you may visit "Cookie Settings" to provide a controlled consent.
Cookie SettingsAccept All
Manage consent