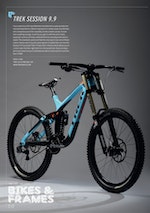 If you want a true DH race bike then we think this is quite possibly the very best that there is. Others may beat it in certain areas, but this bike wins simply because of its neutrality, it’s like a blank canvas. It never does anything strange, it just lets you get on with the job in hand, popping in and out of holes, whilst all the time carrying some serious speed. The drawback used to be that the only way to own one of these carbon frames was to buy the seven grand complete bike, but now the Session 9.9 has joined Trek’s ‘Project One’ scheme which allows you to custom spec the bike, right down to a fancy paint job. Exact pricing is yet to be sorted, but you’ll definitely be able to build one for much less than £7000.

And if you missed it here is the fifth episode of STORIES by Trek World Racing, and it features Neko Mulally and George Brannigan as they race the final two rounds of the 2013 UCI World Cup, in Norway and Austria…

Intense's Carbine 29 is one hell of a fast trail bike.

Dirt 100 2014 - Commencal VIP Meta AM
We use cookies on our website to give you the most relevant experience by remembering your preferences and repeat visits. By clicking “Accept All”, you consent to the use of ALL the cookies. However, you may visit "Cookie Settings" to provide a controlled consent.
Cookie SettingsAccept All
Manage consent