Shimano’s Saint groupset made a mark on the DH scene when it was introduced, and to this day it remains up there as quite possibly the best option for a DH bike build. 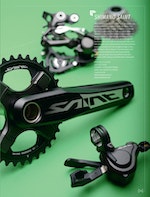 When Shimano first released their Saint groupset it was almost a moment of acceptance for DH. Before that point if you were into riding or racing DH you just had to make do with a drivetrain that was never really intended for the job. Often it wasn’t even designed to venture off tarmac. Saint though was designed from the ground up to meet our needs, and although the first incarnation was a little on the overbuilt side, since then Shimano have refined Saint to the point where we now have components that are light enough to race on, yet they’re still bombproof. The introduction of a Shadow+ chain stabilizer rear mech just made the groupset even better, and now we’d find it very hard indeed to justify building up a DH bike with anything else.

Only one direct mount stem made it into our 2014 Dirt 100, and it was this beauty from Renthal.

If you're after some carbon bars, then they don't come any better than these.

Renthal's Fatbar is the ultimate bar for the discerning downhiller.

Only one direct mount stem made it into our 2014 Dirt 100, and it was this beauty from Renthal.

If you're after some carbon bars, then they don't come any better than these.

Renthal's Fatbar is the ultimate bar for the discerning downhiller.

You know that feeling you get when something just feels right? Well that’s exactly the feeling we got when we first used these bars.

Get a little more from your 10 speed set up with this 11-40T cassette.

Dirt 100 2014 - Response 11-40T 10 Speed Cassette
We use cookies on our website to give you the most relevant experience by remembering your preferences and repeat visits. By clicking “Accept All”, you consent to the use of ALL the cookies. However, you may visit "Cookie Settings" to provide a controlled consent.
Cookie SettingsAccept All
Manage consent