Some think they’re overkill, and yet others swear by them and wouldn’t ride without one. Whatever your take on neck braces the facts are that you only have one neck, it’s far from a good thing to break, and one of these will help stop it happening. With an ever increasing number of riders wearing them it’s not surprising to see that Leatt have now produced this cycling specific version, which offers a greater range of movement when compared to their MX offerings. Like the previous ones the DBX comes in two models; the Comp, which is lighter and offers more adjustment, and then the cheaper Ride. Either way, they’re quality bits of kit and we’ve found them to be a better fit than their recent competition. We just wish the Comp would come as standard in a colour that doesn’t look skanky at just the mere sight of dirt. 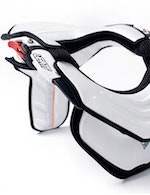 DirtTV: Finally 2 Part 9
We use cookies on our website to give you the most relevant experience by remembering your preferences and repeat visits. By clicking “Accept All”, you consent to the use of ALL the cookies. However, you may visit "Cookie Settings" to provide a controlled consent.
Cookie SettingsAccept All
Manage consent