Six weeks ago we were invited out to North Carolina, USA, to visit components manufacturer Cane Creek at their base near Asheville to get an exclusive first ride on their latest shock, the DBInline.

DBInline: It’s a slimmed-down version of Cane Creek’s popular DB Air CS with all the tech packed in to a small, lightweight unit. Aimed at 120-150mm travel bikes, this isn’t a shock that’s supposed to be able to cope with out-and-out downhill runs, but it closes a gap in the market that the company couldn’t previously cater for (and fits in frame designs that wouldn’t have previously allowed for a DB Air).

Now well established in the world of performance dampers, Cane Creek continue to expand their line with the new DBInline, an inline shock (i.e. no piggyback reservoir) aimed at catering for ‘aggressive’ 120-150mm travel bikes. Dirt’s Ed Haythornthwaite got wind of this development long before it became common knowledge in the industry – he has an uncanny ability for extracting information unwillingly from bike companies – and so it was that I found myself hopping on a plane for an exclusive first ride organised through Ed’s blackmail procedure. 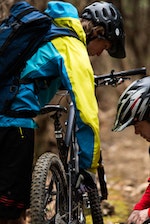 We had the privilege of a week-long stay in nearby Asheville, aka Beer City, and a chance to put the shock through its paces on rides out into the Pisgah Forest with the Cane Creek staff. Here head of R+D Josh Coaplen tends to an amateur’s shock.

The story of my time on the shock, the company and the riding around the stupendously stunning Pisgah Forest you will be able to read all about in the next issue of Dirt, out on May 28. Now let’s take a quick look around the shock. The shock looks a little bizarre from the outside but when stripped down it becomes clear just how much tech is in there. The oil flow membrane is a first in Cane Creek shocks and has allowed the development team to slim the shock down hugely (from a standard DB Air CS) while still allowing for oil displacement.

There’s a lot going on inside the DBInline, nearly 100 parts make up the shock in fact. Two years of development and 70+ prototypes have brought it to final production.

Develop a smaller profile and lighter weight, twin-tube shock to expand the Double Barrel suspension family. This shock improves the performance of shorter travel bikes by offering the same features – performance, reliability, and unparalleled adjustability for which Double Barrel shocks are known.

Read our DBInline ride feature from a week-long stay with the company in Dirt #148 out May 28.

Laurence captures the boosts and roost from yesterday's practice

2014 Leogang World Cup Practice - Gallery
We use cookies on our website to give you the most relevant experience by remembering your preferences and repeat visits. By clicking “Accept All”, you consent to the use of ALL the cookies. However, you may visit "Cookie Settings" to provide a controlled consent.
Cookie SettingsAccept All
Manage consent