Polygon have been around for some time now but have almost been under most people’s radar. They are no strangers to top flight racing though and have had Aussie’s Mick and Tracey Hannah in the saddle since 2013 with the Hutchinson United Racing team. It’s also worth a mention that this new bike has been about for a while now having a near identical prototype model seen at the first round of the world cup in Pietermaritzburg South Africa back in 2014.

With the likes of Kurt Sorge winning RedBull Rampage last year aboard the DH9 we were really looking forward to getting out on the bike. With two different specifications available ranging from £3,900 to £5,350, four sizes from small to extra large and two bottom bracket heights there is some real promise here. We went for the cheaper model in the largest size.

The DH8 model comes equipped with RockShox BoXXer Team fork, as a lower spec bike that’s a good fork to come bolted to the front they seem to work well on the front of the Giant Glory advanced that was recently tested. The rear end is where the big changes come compared to previous model – the DHX. The lower pivot no longer stems from the bottom bracket housing with a large clumsy casting, it is now just above the bottom bracket with a separate pivot mount this should save weight and make for a more reliable system.

The Rock Shox Vivid RC2 damper works well with the new linkage but once again that ugly top out problem rears its head. I think maybe it is time that this issue was addressed by the manufacturer.

This model is the lower specification model as the top model was unavailable in the XL size but al’s good here.

Other than RockShox dealing with the damping it is refreshing to see a Spank wheel being fitted and how it holds up to some abuse. The full Shimano ZEE transmission that was featured in the recent Dirt 100, cheap but by no means does that mean it lacks in performance. I would even go as far as saying the Shimano ZEE brake has been more reliable than the Saint on other bikes tested this year. Polygon have gone with a Kore finishing kit with a slightly odd feel to the shape of the bar, but ultimately these are simple changes when looking at the big picture. Some brilliant Schwalbe Magic Mary rubber tops the build off. 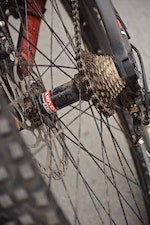 First impressions of the DH8 was of the cramped cockpit which is a real shame, especially with it being an XL. The bottom bracket is also on the high side of things measuring in at over 350mm. This stands you up on the bike and when combined with the short front centre gives a position over the front wheel making the fork feel softer. There is also a real need for a harder spring rate than would normally be used.

On the plus side though the suspension had some real promise, with just the right amount of progression/support. With an offset bush or two in the shock to drop that bottom bracket down this could a great bike. Addressing the size issue I feel this bike would suit the riders from 5’9 to 6ft at a push so it doesn’t really suit the taller riders so much.

It’s a fast bike through the tight poppy turns in part due to the short front centre that the bike offers, it did not seem to slow Mick Hannah down with his second in Cairns this year that’s for certain.

A real downside for me is the noise that this bike makes. With the materials and sound proofing this bike has, it really shouldn’t be like this. It makes bikes such as the Santa Cruz V10 that is a noisy bike, seem quiet! It was hard work concentrating on anything else with this in the background. On the scales this model weighs in on the heavy side at 37.10lbs so it could really do with a diet but there is no need to be too harsh here as the top model with the Fox 40 and other components will be lighter.

There is some serious competition about these days with the likes of YT and Canyon firing bikes out with a wild specification for under the £4K mark it does put other companies in a tough place. This being said it all depends what you are looking for in a bike.

I would say the Polygon in the size XL would translate to a large in other brands and with some love and tweaking this really could be a fantastic bike! Lower that bottom bracket with a pair of offset shock bushings and increase the front centre with an offset headset this should open the bike out for the taller rider and give the stability that is lacking. As it stands though it is in the middle of the line but with some very real potential.

500 riders pay tribute to Richie Byrne, the fallen Godfather of Irish mountain biking
We use cookies on our website to give you the most relevant experience by remembering your preferences and repeat visits. By clicking “Accept All”, you consent to the use of ALL the cookies. However, you may visit "Cookie Settings" to provide a controlled consent.
Cookie SettingsAccept All
Manage consent