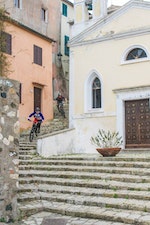 James has always been one for adventures, and sitting on the sandy banks of Punta Ala Camping Resort; burger in one hand, birre in the other, this evening was no different.

Islands and drones and speedboats were discussed as we decided to go and do a day of riding and filming on Elba Island. Once home to the exiled Napoleon from which he famously escaped and made his way back to Paris only to be exiled once again, this time for good.

At 5 am we jumped on a ferry from Piombino excited but definitely in search of the coffee bar. The ferry took less than an hour and swinging into the harbour it was like stepping into a page of lonely planet. Typically picturesque pink and yellow villas stacked up the hill and fishermen bringing in their catch to sell harbour side.

We were greeted by Dario from Elba Gravity Bike and all piled in the Mercedes uplift wagon to make our way up through the steepest cobbled streets I have ever encountered. The road looked so polished I genuinely closed my eyes in fear at one point, completely unable to justify how the van had any grip! We were with an E-bike riding photographer, Alex, so it was probably that battery pack weighing the van down…

The first descent of the day started from a 360° view point that looked out to the ocean on all sides, dropping into green lush forests on the way down in the distance were two castles that Dari gave us a quick history off and then we dropped in… The ground was dusty and dry and we flew down across meadows of hundreds of wildflowers and into fast turns and little super senders. High up descents are broken up by little climbs and traverse before dropping into a decidedly different terrain of curling tree tunnels and gullies littered with rocks to pick your way through at whatever speed you dared.

The runs seemed to wind down the hills forever until eventually we came out into the deepest red rock quarries, if it hadn’t been for the dappling of lilac heather and daisies everywhere I would have been waiting for stormtroopers to come marching around the corner!

It just so happened that It was also the Italian Rally that day, which made uplifting a little risky but provided us with fantastic entertainment for our lunch! Which was the typically Italian affair of fresh pasta, cold meats, and complete outrage that you might drink any coffee other than espresso! We found a veranda and had lunch within reaching distance of the drivers clapping past mid stage.

We spent the afternoon shooting and riding endless fast fun trails in the woods and the meadows. Shooting was amazing as EVERYTHING made a beautiful picture, we could have spent a week there and only filmed two tracks. They got satisfyingly technical in the woods where the rocks were axle height and our tyres slid over the fallen leaves around flat corners. Shaley banks made great wall rides and evidence of wild boar provided rough sections of loose dirt to blow through there were even some steeper switchbacks which we had way too much fun riding to even consider getting the camera out!

Winding our way through the buildings and flower pots, ducking through washing lines and around the abundant cactus that grew on the outskirts of the town we headed back to the harbour just in time for our ferry to arrive. Elba was beautiful and we barely scratched the surface…

Thanks to the Punta Ala Trail Centre

The two Rs continue to dominate

More features and increased travel for the ground muncher

Updates on DH stem and pedal range too