Film maker Tom Caldwell just dropped us a line about this edit with Josh Gleave for #DelamereAintDead, “It’s short and sweet and is spearheading the Delamere revival (where Peaty and Pagey did that hardtail segment in Earthed 3)”. But (lets not forget) it is also where Josh Bryceland bagged his first Dirt cover back in 2004 on issue #45. 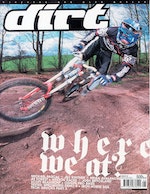 Here’s a bit more from Tom:

“Who the hell is Josh Gleave? Well, he’s a farmer from Cheshire in the UK and the first thing he said to me was that he’d been ‘playing with nipples’ – or milking cows if you didn’t connect the dots. He’s the type of guy that goes to pick up girls in his tractor. It turns out he’s an absolute don at his local trails of Delamere Forest, and his cornering is something of a spectacle.

Who remembers the section from Earthed 3 where Peaty and Nigel Page were ripping on hardtails? Yeah, well that’s our local – Delamere Forest. It fell into somewhat of disregard over recent years as people lost the faith, but as of now the revival is on. Josh, who lives right on the edge of the forest, is here to show you what you’re missing. Bucket loads of potentially savage loam corners waiting to be ripped, along side all the classic gaps and rock hard berms that were railed by Peaty and the boys years before. He’s a real country boy is Josh. His bike, his mini spade and a few caves to climb in and he’s happy as a pig in poop. Hold on tight, Josh doesn’t hang around.”

From boxes and bits to complete build...

From boxes and bits to complete build...

A new kid on the block for enduro helmets

Just to get you in the mood...