With a new bike and some new faces, 2017 is set to be a big year for team Propain Dirt Zlevy.

With 2016 now in the books, a successful and growing Propain Dirt Zelvy looks to 2017 with a new crop of riders to join Phil Atwill‘s assault on World Cup DH. With the ever growing and helpful support from sponsors we have been able to expand the team and form one of our strongest line ups to date.

With Isak Leivsson and James Purvis moving on, in come two of the wildest young riders the UK may have ever seen. Introducing the Kerr twins (no relation). Hailing from Scotland, both Henry and George take on the Junior category in both World Cup DH and the British Downhill Series under the watchful eye of wildman Phil Atwill and long term Team Manager Ben Reid.

While standing track side during 2016 manager Ben was impressed multiple times by the young twin brothers by their ultra-smooth, stylish and efficient riding styles that go beyond their years, with Henry taking the BDS overall as a final year youth, discussions with father Greg began. These two are certainly worth keeping an eye on for the coming podiums and loose videos that lie ahead.

Along with the junior recruits, Austrian David Trummer joins the team to take on the Elite category along with Phil. These two are good friends, so the chemistry is already there, here’s to hoping they can work as a dream team on the world cup circuit.

David certainly knows his way around the World Cup top 20 as he proved during 2016 (16th in Vallnord and 17th in Fort William) and with IXS Cup wins to his name as well. David is certainly an underdog but watch out for his name in 2017. 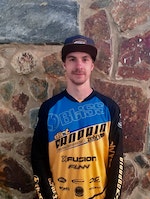 The man, the myth, the legend Phil Atwill returns for 2017 having also extended his contract into 2018. The wild man plans on assaulting the World Cup DH, BDS and Crankworx events – ever expanding his skill set on the bike. We’re certainly looking forward to seeing him poke his nose into the World Cup top 10 this year after several years of looking solid inside the top 20.

With a 2nd overall in the BDS series Phil will also be looking to go one better, however with the clash of Crankworx Rotorua and BDS round 1 Phil will have his work cut out to gain back the points. Let’s not forget this man’s media presence – that’ll go through the roof again with the banger videos we’ve got planned!

Phil rides with his heart and watching him haul ass while smiling from ear to ear is nothing but infectious. This man just loves riding his bike and by golly does it show!

Where’s Innes Graham I hear you ask? Well, he’s back on a bike and enjoying riding again, but is still in the recovery phase of his horrific injury suffered in Lenzerheide, Switzerland last year.

Innes’s 2017 racing status is very much recovery dependent and he plans to test the waters with competition as soon as he feels up to it. 2016 started out great for the young Scotsman taking a very respectable 2nd place at the BDS season opener and leading the series after his win at round 3, words from Innes explain he won’t come back to racing until he knows he is 100% and can again challenge for the top spot.

All being well we will hopefully see Innes at some of the races during 2017 but either way the team is on standby to offer him support as and when he needs it. We’ll keep our fingers crossed for Innes in wishing him a speedy recovery and back into competition.

And there’s the Propain Dirt Zelvy line up for 2017. A strong, confident and wide ranging roster of young wild men and seasoned, experienced World Cup riders. We’re excited for the coming season and all it may bring. We’ll see you at the races!

We would like to take this opportunity to thank all our main sponsors for having the faith to extend contracts to the end of 2018, it’s an honour to be involved with such enthusiastic brands who love racing as much as we do.

2016 was the team’s most successful season to date much of which is without doubt due to the effort from our sponsors who have worked relentlessly to produce the best products available.

We would also like to welcome two new products to our sponsor list. Olfi helmet cameras and Funn pedals. After trailing the Olfi products during 2016 and getting an inside look at what these guys have in the pipe line we’re delighted to tie up a deal that we hope will be the beginning to another long term partnership.

With the launch of Funn Components new clip in pedal and some off season testing the team is also delighted to add the new MAMBA pedal to the list of Funn parts that we run on our bikes.

A big ride for the young American

Do you want to run Maribor Bike Park?

Do you want to run Maribor Bike Park?