As you can read here we’re not too sure that the track at Pietermaritzburg, South Africa, should even be featured in the World Cup calendar, but then again we’ve been saying that ever since the UCI first decided to include it, and it doesn’t look like anything is going to change soon either. So, what do you do when faced with a track that features so much pedalling? Well some riders like Greg Minnaar choose to just run their regular DH bikes, albeit with much lighter and faster rolling tyres, whereas others look to build a specific ‘PMB bike’ from the ground up. 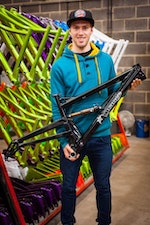 As part of the new Orange Dirt World Team Harry Heath has managed, with the help of Orange of course, to sort himself out with this custom one off frame which forms the basis of the bike he will be taking to PMB this weekend. Will it help him take on the big guns? Who knows, only time will tell, but in the meantime this is what Sim from Orange had to say about how this frame came about…

The frame that Harry has is strictly speaking a Strange, the fruit of Orange’s prototype division. When we started to talk about a bike for South Africa our first thought was to get Harry on the Strange 160 29er we showed at Eurobike last year, the 322 seeming a touch overkill for the course. Harry did some testing with the 160 29er and thought it could be an ideal fit for the South African track, the combination of 29″ wheels and 160mm keeping things DH bike fast and trail bike sharp. In the end fork choice ruled out this frame, but we did have another option for Harry, another Strange.

This one uses the same 160mm of travel but without the distinctive through-the-downtube shock mounting of the Strange 160 29er, or the 322, and it’s designed around 27.5″ wheels rather than 29″. Seat tube wise it comes up as a medium (431mm), however while a medium usually equates to a 600mm effective top tube across our range this, one has a 620mm ETT. That gives it a wheelbase of just over 1210mm, on par with a Large 322. That length gives plenty of stability while the 27.5inch wheels give a good compromise between all-out high-speed and acceleration and manoeuvrability. The plan is for Harry to run a set of Fox 40s lowered to 170mm, in that set-up the frame will have a 64º head angle.
Being a World Cup, and the attention that brings, the frame has Orange decals on it, but it’s still a Strange, still a prototype. Harry just happens to be taking it to the sharper end of prototyping.

If you want to see more of this bike then click on the gallery below, and the full bike spec is below that…