JBC Bikepark in Jablonec, Czech Republic was the host for round 5 of the 2014 4X ProTour. After 4 superb rounds already, it was time for the riders to take on the most challenging track on the 4X ProTour. Famed for last year’s Marosi Wall ride pass; this track has it all. Gap jump from the start, huge jumps, wooded section full of roots and rocks, wall ride and technical jumps that really catch the riders out. It is the ultimate 4X challenge and the venue for what was an amazing night of 4X racing.

The event started on Thursday with practice. An hour and a half for the riders to start working on their lines and getting used to the high speed and nature of this track. The weather didn’t help much as windy conditions at the top of the track prevented riders hitting the big doubles. As with the event in 2013, it took riders the most time getting used to the speeds. In excess of 50mph at times on a hardtail, it is a tough track to master.

After the practice session on Thursday there was the opening ceremony in the centre of Jablonec town with the mayor giving out the number plates to the top 10 UCI World ranked male riders, along with interviews with them all in front of huge crowds. The atmosphere and expectation for the race was already bubbling with the locals, and it was great to see the whole city getting behind the event.

Friday rolled around and it was qualifying day. Luckily the weather had changed and it was hot and sunny, plus, importantly the wind had disappeared. Within the first few minutes, the riders were flying through the air and getting the huge doubles dialled. The track was perfect and the scene was set.

In the women’s qualifying it was Helene Fruhwirth who set the fastest time ahead of Heather Kay. Helene made no mistakes on her way to maximum qualifying points and the important number 1 plate for Saturday’s racing.

Next up it was the men. Running in reverse order to the UCI World rankings, the fastest riders qualified at end. As each rider left the start, the times were getting quicker and quicker by the finish line. Joost Wichman was the first rider to lay down a time that looked like it could be the quickest time. The 2013 4X World Champion looked fast all week and his run was solid. Felix Beckeman then went quickest. The Swedish rider looked faultless in his run but was it going to be quick enough? The answer, possibly unsurprisingly, came with the last rider on course. Tomas Slavik built the track, runs this race, and in all honesty, simply looked faster than anyone else. Taking the fastest time to the roars of the home crowd.

Onto race day. The crowds turned up in their thousands. At an estimate there were 7,000 passionate Czech 4X fans all with air horns, flags and whistles. There was a true party atmosphere and this was going to be a fantastic night of action. They we looking for hometown hero Tomas Slavik to take the victory, but would it be his night? First up, the top 10 riders were introduced to the crowds. Fire, smoke and each rider’s choice of music introduced them to the huge crowds. Then the Red Bull Flying Bulls took centre stage. 2 air race planes flew just 50 metres above the crowd doing loops, stalls and fly bys just feet above the crowds. It was truly awesome.

Onto the racing. A big name out in round 1 was Marek Pesko. The Slovakian rider crashed in turn 1 and a was out with a wrist injury. Petr Muhlhans, Blake Nielson and Stefano Dolfin were amongst the others knocked out early. In the quarter finals, Scott Beaumont, Jakub Riha, Simon Waldburger, Lewis Lacey and Michael Mechura were all eliminated. The track was definitely causing some upsets. 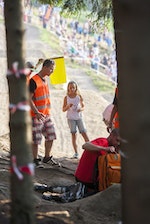 Onto the semi finals. In semi final 1, Tomas Slavik and Quentin Derbier made sure of their final places by going 1st and 2nd at the finish line eliminating Aiko Gohler and Jan Svub. In semi final 2, it was almost unbelievable what happened. Into turn one, Felix Beckeman took the lead ahead of Hannes Slavik. Heading down the second straight, Beckeman overshot the first double but survived, Hannes Slavik pushing hard overshot the second double, but it ended in what was one of the most violent crashes ever seen in 4X racing. Slavik ‘rag dolled’ into the woods. It was a horrific crash. Joost Wichman, who was in 4th hit the brakes and stopped to help. Medics were quick to the scene and Slavik was soon airlifted to hospital. Amazingly, Hannes suffered a serious concusion but no broken bones. A night in hospital then he was on his way home. All the best to Hannes from the 4X ProTour team and all the riders. Felix Beckeman did not even know Hannes had crashed as he crossed the finish line, nor did Hynek Strouha, who, riding a downhill bike, booked his final place for a second consecutive year.

So first up were the women. Helene Fruhwirth made a great start but British rider Heather Kay was riding at her best and was on Helene’s rear wheel. Entering the woods, Kay began to close the gap, but in the rock section, Heather pushed too hard and lost the front wheel crashing out. Helene took the win and with it took the overall series lead.

In the men’s small final, new rider Jan Svub who, riding in his first ever 4X ProTour took the win and with it the final step of the podium with 5th for the day.

Onto the main final. Tomas Slavik took gate 1, Beckeman in 2, Quentin Derbier in 3 and Strouha in 4. The gate dropped and it was Slavik and Derbier battling into turn 1. Beckeman dived inside and moved into 2nd. Strouha at this point had his downhill bike wound up and was charging. Through the woods Strouha moved into 3rd relegating Derbier to 4th. Slavik was flying and extending his lead. Across the finish it was Slavik ahead of Beckeman, Strouha and Derbier.

After huge podium celebrations, the masters of dirt and Jagermeister guys took control and the after party began. With Fuel Girls blowing fire, dj’s, bands and thousands of happy Czech fans, this race was the perfect showcase for 4X ProTour, the sport of 4X and all the riders.

Thanks to the worlds MTB media who supported the event, the live webcasts, the fans in Jablonec, the riders, the sponsors for this race and most of all Tomas Slavik and his crew for working tirelessly on this project and helping to show the world that 4X is amazing.

The next round of 4X ProTour is this weekend – 2nd August, at Leibstadt, Switzerland. A silver round of the 4X ProTour, it sounds like most of the World’s top riders will be there as the season starts to get to the sharp end, with only one round remaining after Leibstadt, riders are fighting for every point they can get.

For more information on the 4X ProTour, visit:

Ouch! Scott took a hell of a crash in Bulgaria but walked away ok

All the details on this weekend's 4X National Champs in Falmouth

Ouch! Scott took a hell of a crash in Bulgaria but walked away ok

All the details on this weekend's 4X National Champs in Falmouth

Watch Round 6 of the 2014 4X ProTour in Leibstadt, Switzerland live

Should Dual Slalom Racing be King Again? | Dual or Duel?

Dirt correspondent Nick Hamilton tells us why he thinks dual slalom racing should be king again...

Should Dual Slalom Racing be King Again? | Dual or Duel?