The third day of the 2010Mountainbike National Championships was completed today at the Long Gulley Downhill venue at Brooklyn in Wellington. Difficult weather conditions created a huge variable for the 200 Downhill competitors racing for National titles, with hot, dry and vicious gusting winds turning an already challenging race course into a treacherous race for survival. The Downhill race for National Championship titles was under way at 2pm. The morning’s seeding session produced a mixed bag of results across the age group categories, with many strong favourites being gathered up in the clutches of the gusting wind to fall off the pace. However, come race time and the summer form book regained its worth – deserved champions crowned across the board. Of note was the performance of George Brannigan (Hastings) who was racing in the Under 19 category for this title after a summer racing in the Elites. Brannigan convincingly won today, in a time that would have placed him 6th in the Elite field. Likewise Local Wellington rider Dan Meilink – like Brannigan Meilink seeded first in Senior Mens and backed that up to win his first Senior Mens Downhill National title. 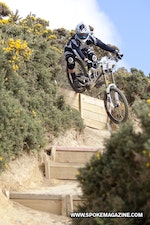 In the Elite Womens race Harriet Harper (Blenheim) was after back to back National Championship titles in the prestiguous Downhill discipline. And she did this in style, winning over the fast improving Sarah Walker. BMX Olympian Walker was all praise after her foray into downhill racing, recognising first hand just how tough and uncompromising this sport is. Walker may just have enjoyed this experience so much that it won’t be the last seen of her on a 26″ downhill race bike.

The Elite Mens race was missing New Zealand’s two highest ranked racers – Sam Blenkinsop through injury and Justin Leov. However, the quality of field chasing this 2010 National title was extremely high, with all of NZ’s other top professionals and several visiting international athletes in the field. 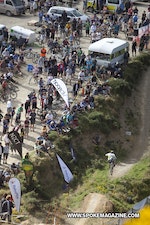 Wyn Masters (New Plymouth) seeded first, and the rest of the top ten seeded riders were right on his tail time-wise. But this race was to be Wyn Master’s finest moment and he followed through on his top seeding time to take the Elite Mens National Championship title from Wanganui’s Glenn Haden. Haden had won at Long Gulley before in similar conditions, and lost out to Master’s typically powerful and controlled display by only 0.3 seconds. Levin’s Nathan Rankin took third, with Cam Cole (Christchurch) and Four Cross National Champion Matt Walker (Kawerau) 4th and 5th. For Masters this title win seems to have been a long time coming, and for the likeable and charismatic Taranaki streak, totally deserved this year. The RaboPlus Mountainbike National Championships finish tomorrow with the Hillclimb event on Mt. Victoria at midday.

Now with added Wall Of Death. Todays Randoms are brought to you from the lovely sea front at Worthing. http://www.youtube.com/watch?v=-0Xa4bHcJu8 the day Worthing sea-front was invaded...

Sorry, I mean cycles, bicycles, mountainbikes but I keep saying wives. Here is a selection of Dirt readers rides taken from the Dirt Forum. If you want...

Now with added Wall Of Death. Todays Randoms are brought to you from the lovely sea front at Worthing. http://www.youtube.com/watch?v=-0Xa4bHcJu8 the day Worthing sea-front was invaded...

Sorry, I mean cycles, bicycles, mountainbikes but I keep saying wives. Here is a selection of Dirt readers rides taken from the Dirt Forum. If you want...

It’s Friday and we got some special shoes in the office, some Minnaar 5:10 shoes with clips. Now 5:10 are famous for their flat pedal...

A slopestyle bike that’ll more than likely be getting treated to dh-chic, trail and sporadic jump use – and so much more than a do-it-all...