You might remember a couple of weeks back the first round of the Victorian State DH series, now we have the second round, courtesy of The Trailmix-Procon Racing Crew who have just e-beamed us over the second of their race reports.

The second round was at Shepparton – Mt Major

Here’s the report from from the TPR Crew:

Friday the 4th of November saw us hit the road for Mt Major, the second round of the Victorian DH Series near the large rural town of Shepparton. This track has seen state and national DH rounds, as well as hosting the Oceania MTB Championships earlier this year. Some people love the track, some people hate it, but regardless of what people’s opinions were we were all here for a fun weekend of racing and hanging with mates! History tells us that Shepparton is always hot, always dry, always dusty and always carnage, and this year did not disappoint! With a migration of some of Australia’s best riders coming from all around the country, racing was going to be tight and super competitive!

Once again sickness hit the team on Friday night, this time with Ricky Clarke being the one with his head over the toilet bowl for the weekend. With Saturday and Sunday temperatures expected to hit 32 and 36 degrees we set up camp and made the pits as cool and comfortable for the riders as possible as a few early practice runs were rapidly punched out by the team in an attempt to beat the heat. The track was running as expected, with riders coming down covered in dust, injured or with flat tyres, thanks to the plethora of sharp rocks on course. Thankfully the Trailmix-Procon Racing team managed to stay out of any major trouble for most of the day until Olly Zwar came down on his last practice run, binning it hard on one of the large rock ledges and went flying with his bike down the side of the hill into a ‘boulder field’. Stumbling into the pits nursing injuries and fresh holes in his jersey, pants and helmet, Olly headed straight home for a night of rest and recovery as our team mechanic Gee Ritchie set about repairing the badly damaged bike. After a dry day on the track the team drove back to our accommodation and jumped straight into the pool as I cooked dinner and Gee set about fixing the bikes.

Our alarms went off in the morning to a beautiful spring sunrise and the day had already began heating up. With only 3.5 hours of practice left before racing, most of the team did 2-3 warm up runs before succumbing to the comfort of the pits and kicking back on the beanbags until race time. By this stage the track had drastically blown out and was changing with every rider that came down, so when qualifying rolled around there were a few little surprises. Jai Motherwell was the first of the team to hit the blown out track, and with a crash and some little mistakes lost some important time and just hung in there to qualify in 18th position. Olly crossed the line soon after and into a comfortable qualifying position of 7th. Lewis Winton and Ricky Clarke were next on track with Lewis qualifying in 13th position. Ricky came down the hill in his usual wild fashion and crossed the line into a solid 4th place. The pits were full of excitement as once again we had all riders qualify for finals. 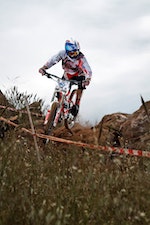 By the time finals rolled around and all the other categories had raced the track was even more blown out and wild and there was even a threat of rain off in the distance. Jai and Olly headed up for their race run, with Jai crashing again and crossing the line into 16th place. Olly continued his love of all things 7, and crossed the finish line into 7th position for the second race in a row, and into the top 5 for the overall for the U/19 category. Lewis Winton was the next Trailmix-Procon rider on course and ended up finishing 11th in Elite Men, just outside his goal of a top 10 performance. Ricky was the final rider down the hill for the team, and the fourth last rider down the hill for the weekend due to his qualifying position. In typical Ricky style he came into the view of the finish line sideways and out of control, but with intense determination managed to place 5th in Elite for Trailmix-Procon Racing’s first podium of the season, just behind the likes of Marcus Fairbanks, Dave McMillan, Connor Fearon and Tim Eaton!

Well done to all the riders, and best wishes to those 10-20 riders who are out there recovering from the weekends crashes. We would like to extend a big thank you to the volunteers the the Goulborn Valley MTB Club for turning on another impressive event! Without you the show doesn’t go on. We would also like to thank our generous sponsors, Trailmix, Procon Group, Specialized Australia, SRAM Australia, Anthem Industries, Narimba Fitness, Natural Swim Ponds Australia, Adidas Eyewear and Alpinestars. For more information on the team find us at the Trailmix-Procon Racing Facebook page (www.facebook.com/trailmixproconracing)

"This adrenaline is worse than drugs"