Our king of the stats Mark Shilton has once again been crunching those times, and so here’s his low down on what went on in Val di Sole this year…

What to analyse when one rider so completetly dominated the field? It’s a difficult one but I’ll give it a try… The 7.85sec gap from Aaron Gwin to second place Greg Minnaar was only half a second shy of the 8.3sec gap between Minaar and 20th placed Mickael Pascal, that was how dominant he was. In fact, this will go down as one of the biggest winning margings ever seen.

It is hard to compare across races but the fairest way is to look at the percentage difference between the winning and the second placed time. Looking back across the last three years, three quarters of races were decided by a less than 1% time difference. Before Sunday, and apart from Danny Hart’s one of a kind ride in the wet at Champery last year, the biggest winning margin of the last three years was only 1.6% – also claimed by Aaron Gwin at Windham last year. Gwin’s time on Sunday was 4.1% faster than Greg Minnaar on a dry track that was the same for everyone. Not quite at the level of Hart, or Chris Kovarik’s 14 second demolition job at Fort William in 2002 (which was 4.9% faster) but it’s still the stand out World Cup winning margin of the last three years, and probably more (sorry, no time to look further back!). 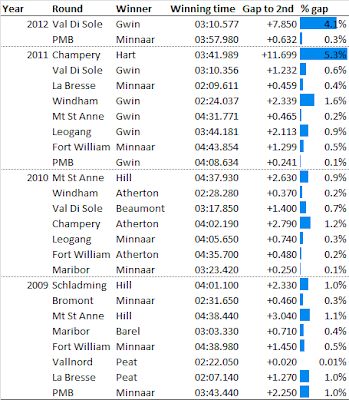 What about the rest of the field? The one thing that stands out in the heatmap of the top 20 is how no-one apart from Gwin managed a consistently paced run. Minnaar was 3rd on Sector 1 and 2 and then only 7th in Sector 3. Gee Atherton and Marc Beaumont could only manage 21st and 11th respectively in Sector 3. Conversely, Sam Blenkinsop had a slow first two-thirds of the race with a 22nd and 14th but hauled himself up to 8th overall with the second fastest Sector 3 of the day, only 0.474 secs off Gwin. Bernard Kerr also managed a career best World Cup result with the 6th fastest final sector boosting him up to 13th after a 28th fastest first split. 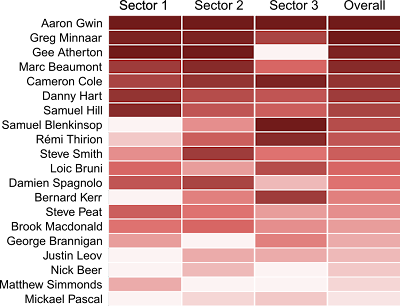 Although Gwin won every single split, the pattern was similar to last year where he absolutely destroyed the field in the first two sectors then consolidated on the final run into the finish. Unfortunately for the others, the guy that got closest to him in Sector 3 (Blenkinsop) was running 14th after split 2.

So, Aaron Gwin – faster AND more consistent than the rest of the field. What odds on him making an attempt at Kovarik’s 14 second margin at Fort William?!

Look at the stats! Heatmaps, time charts and expert race analysis from the Windham World Cup. Words and charts: Mark Shilton Another Sunday, another win for Aaron...

Look at the stats! Heatmaps, time charts and expert race analysis from the Windham World Cup. Words and charts: Mark Shilton Another Sunday, another win for Aaron...

Velocity One is the title of this brilliant Val di Sole WC edit from Vittorio and the Triride crew. Speed, in the world of dh, is...