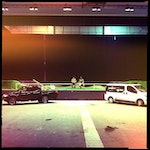 Yep, amongst other things he’s the Scott 11 team manager, Red Bull Crashed Ice main man, and he has to look after his track and trail building company Velosolutions. Here’s what he has to say about his latest project:

“We just built this new Velosolutions concrete pump track on a concert stage in a city hall in Chur, Switzerland, for a trade show in May. The government wants to promote pump tracks in the area, and wants the towns to build more of them. That’s why they got us to build this one for the trade show.

The big challenge was not to overload the concert stage, as it would only take 600kg per square meter. That’s why we had quite a bit of effort to do: We started by covering the stage with boards and and a base carpet. The outside of the turns were built with boards as well, the raw shape was made with polystyrol foam to save weight. The fine shape was then made with real dirt, which then was covered with 10cm of concrete. Finally, we had to make it look clean with the green top carpet, which might be covered with grass just before the show begins.”

Neal Hunt from Magura popped by the office with the Thor 150mm trail fork and the MT2 and MT6 brakes. We pointed the camera in front...

Neal Hunt from Magura popped by the office with the Thor 150mm trail fork and the MT2 and MT6 brakes. We pointed the camera in front...

It’s chucking it down outside, dry yourself off from your afternoon ride, put the kettle on grab a slice of lemon drizzle cake, sit down...

We tested Labyrinth’s excellent Agile trail bike back in issue 117, but now we’ve got our hands on their flagship DH bike… Labyrinth may well be...