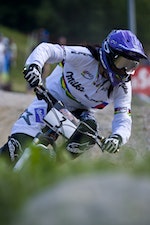 As the sun went down over Val di Sole, riders from across the world were going wheel-to-wheel for round two of the 4X Pro Tour.

The 64 men who made it through yesterday’s qualifier battled it out on the 45 second track. All night long the defending world champion, Michal Prokop (Czech Republic), was looking strong, getting the lead from the gate and pulling away from the competition. In the final it was not to be though, his countryman, Thomas Slavik, took the lead into the first corner and not matter what Prokop tried, he couldn’t close the gap. Scott Beaumont (Great Britain) took the third step of the podium.
In the women’s racing, last year’s defending series champion and world champion, Anneke Beerten (Netherlands), was unbeatable, winning every one of her heats and comfortably taking the win in the final. She was one of the few ladies who tackled the intimidating jumps on the track’s pro-line.  Katy Curd (Great Britain) was her nearest competitor and looked strong throughout her heats, but she couldn’t find the power out of the gate to stay with Beerten. Celine Gros backed up qualifying 17th in the downhill earlier in the day with the third spot of the podium.

Aaron Gwin wins qualifying with no chain and Sam Hill runs over Victor's toe! The stories and photos from Windham World Cup qualifying.

Aaron Gwin wins qualifying with no chain and Sam Hill runs over Victor's toe! The stories and photos from Windham World Cup qualifying.