occasionally some things just happen in such synchronicity that one must wonder whether it is a deliberate manifestation of an invisible and conspiratorial hand.

the chain of events to which i’m referring to is the announcement that the legendary bike builder Jeff Steber has been experimenting with wagon wheels on a big bike…and the second linking event is that i have just become wedded to a bicycle with 29inch wheels. 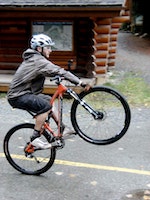 As you may or may not know i have been helping Bike Mag boys test a bunch of 2010 bikes here in Whistler over the past month. i must of ridden somewhere around 50 bikes of all descriptions. but the one bike that has stood out is the Santa Cruz Tallboy.

i fell in love with this bike so much that i’ve decided to steal it and abscond to mexico with it.

here is a link to some love lust words i wrote about it on Spoke Magazine.

seriously, anyone who has read Whistler Diaries you must know how against ive always been about weird wacky changes in bicycles, but theres something in the frame of the Tallboy that makes me love it. its fast and fun.

so to the invisible conspiratorial hand…is there some force that is trying to alter mountain bikes. some powerful, machiavellian industrious group with a plot and plan to change the face of biking?

calm down Seb, i doubt it.

Right now i bet there some internet fury and furor going on in those crap holes of mountain biking that we call internet forums. theres probably a huge number of weirdos saying that they told us all so, and that they have been preaching forever that 29ers are the future of all mountain bikes. likewise there will no doubt be a heap of angry mountain bike villagers carrying flaming torches ready to burn the voodoo witch that is 29ers.

let those with nothing more to do argue and anger themselves, im off riding, on my shiny orange Tallboy. simply because it is so much fun.

The League of Gentlemen race series is becoming viral, brace yourselves, it’ll be in a town near you sooner than you think. Here’s a...

The League of Gentlemen race series is becoming viral, brace yourselves, it’ll be in a town near you sooner than you think. Here’s a...